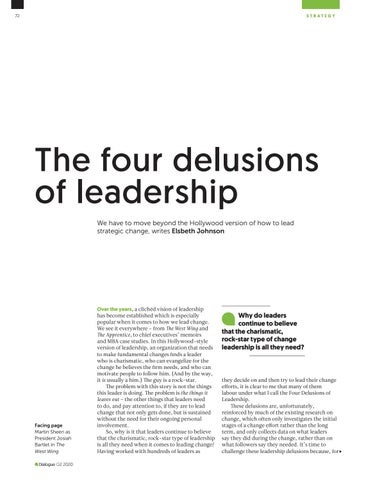 The four delusions of leadership We have to move beyond the Hollywood version of how to lead strategic change, writes Elsbeth Johnson

Over the years, a clichéd vision of leadership has become established which is especially popular when it comes to how we lead change. We see it everywhere – from The West Wing and The Apprentice, to chief executives’ memoirs and MBA case studies. In this Hollywood-style version of leadership, an organization that needs to make fundamental changes finds a leader who is charismatic, who can evangelize for the change he believes the firm needs, and who can motivate people to follow him. (And by the way, it is usually a him.) The guy is a rock-star. The problem with this story is not the things this leader is doing. The problem is the things it leaves out – the other things that leaders need to do, and pay attention to, if they are to lead change that not only gets done, but is sustained without the need for their ongoing personal involvement. So, why is it that leaders continue to believe that the charismatic, rock-star type of leadership is all they need when it comes to leading change? Having worked with hundreds of leaders as

Why do leaders continue to believe that the charismatic, rock-star type of change leadership is all they need?

they decide on and then try to lead their change eﬀorts, it is clear to me that many of them labour under what I call the Four Delusions of Leadership. These delusions are, unfortunately, reinforced by much of the existing research on change, which often only investigates the initial stages of a change eﬀort rather than the long term, and only collects data on what leaders say they did during the change, rather than on what followers say they needed. It’s time to challenge these leadership delusions because, for