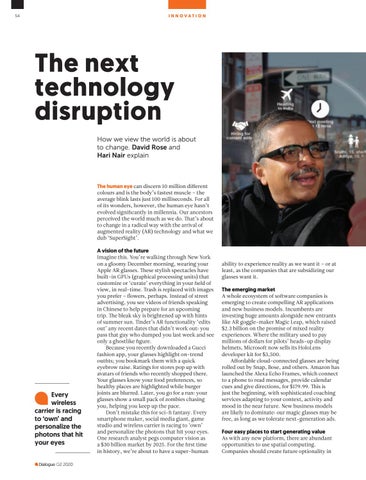 The next technology disruption How we view the world is about to change. David Rose and Hari Nair explain

The human eye can discern 10 million diﬀerent colours and is the body’s fastest muscle – the average blink lasts just 100 milliseconds. For all of its wonders, however, the human eye hasn’t evolved significantly in millennia. Our ancestors perceived the world much as we do. That’s about to change in a radical way with the arrival of augmented reality (AR) technology and what we dub ‘SuperSight’.

A vision of the future

Imagine this. You’re walking through New York on a gloomy December morning, wearing your Apple AR glasses. These stylish spectacles have built-in GPUs (graphical processing units) that customize or ‘curate’ everything in your field of view, in real-time. Trash is replaced with images you prefer – flowers, perhaps. Instead of street advertising, you see videos of friends speaking in Chinese to help prepare for an upcoming trip. The bleak sky is brightened up with hints of summer sun. Tinder’s AR functionality ‘edits out’ any recent dates that didn’t work out: you pass that guy who dumped you last week and see only a ghostlike figure. Because you recently downloaded a Gucci fashion app, your glasses highlight on-trend outfits; you bookmark them with a quick eyebrow raise. Ratings for stores pop up with avatars of friends who recently shopped there. Your glasses know your food preferences, so healthy places are highlighted while burger joints are blurred. Later, you go for a run: your glasses show a small pack of zombies chasing you, helping you keep up the pace. Don’t mistake this for sci-fi fantasy. Every smartphone maker, social media giant, game studio and wireless carrier is racing to ‘own’ and personalize the photons that hit your eyes. One research analyst pegs computer vision as a $30 billion market by 2025. For the first time in history, we’re about to have a super-human

ability to experience reality as we want it – or at least, as the companies that are subsidizing our glasses want it.

A whole ecosystem of software companies is emerging to create compelling AR applications and new business models. Incumbents are investing huge amounts alongside new entrants like AR goggle-maker Magic Leap, which raised $2.3 billion on the promise of mixed reality experiences. Where the military used to pay millions of dollars for pilots’ heads-up display helmets, Microsoft now sells its HoloLens developer kit for $3,500. Aﬀordable cloud-connected glasses are being rolled out by Snap, Bose, and others. Amazon has launched the Alexa Echo Frames, which connect to a phone to read messages, provide calendar cues and give directions, for $179.99. This is just the beginning, with sophisticated coaching services adapting to your context, activity and mood in the near future. New business models are likely to dominate: our magic glasses may be free, as long as we tolerate next-generation ads.

As with any new platform, there are abundant opportunities to use spatial computing. Companies should create future optionality in