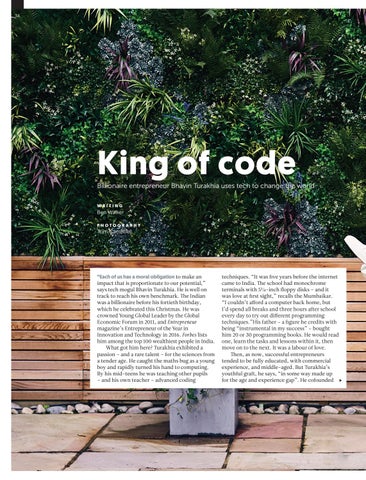 “Each of us has a moral obligation to make an impact that is proportionate to our potential,” says tech mogul Bhavin Turakhia. He is well on track to reach his own benchmark. The Indian was a billionaire before his fortieth birthday, which he celebrated this Christmas. He was crowned Young Global Leader by the Global Economic Forum in 2011, and Entrepreneur magazine’s Entrepreneur of the Year in Innovation and Technology in 2016. Forbes lists him among the top 100 wealthiest people in India. What got him here? Turakhia exhibited a passion – and a rare talent – for the sciences from a tender age. He caught the maths bug as a young boy and rapidly turned his hand to computing. By his mid-teens he was teaching other pupils – and his own teacher – advanced coding

techniques. “It was five years before the internet came to India. The school had monochrome terminals with 5¼-inch floppy disks – and it was love at first sight,” recalls the Mumbaikar. “I couldn’t aﬀord a computer back home, but I’d spend all breaks and three hours after school every day to try out diﬀerent programming techniques.”His father – a figure he credits with being “instrumental in my success” – bought him 20 or 30 programming books. He would read one, learn the tasks and lessons within it, then move on to the next. It was a labour of love. Then, as now, successful entrepreneurs tended to be fully educated, with commercial experience, and middle-aged. But Turakhia’s youthful graft, he says, “in some way made up for the age and experience gap”. He cofounded