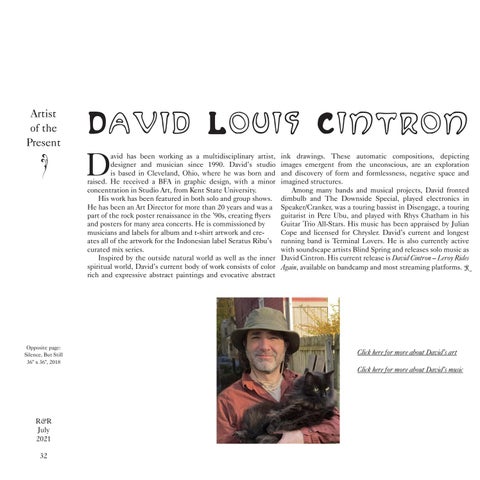 Artist of the Present

David Louis Cintron D avid has been working as a multidisciplinary artist, designer and musician since 1990. David’s studio is based in Cleveland, Ohio, where he was born and raised. He received a BFA in graphic design, with a minor concentration in Studio Art, from Kent State University. His work has been featured in both solo and group shows. He has been an Art Director for more than 20 years and was a part of the rock poster renaissance in the ’90s, creating flyers and posters for many area concerts. He is commissioned by musicians and labels for album and t-shirt artwork and creates all of the artwork for the Indonesian label Seratus Ribu’s curated mix series. Inspired by the outside natural world as well as the inner spiritual world, David’s current body of work consists of color rich and expressive abstract paintings and evocative abstract

ink drawings. These automatic compositions, depicting images emergent from the unconscious, are an exploration and discovery of form and formlessness, negative space and imagined structures. Among many bands and musical projects, David fronted dimbulb and The Downside Special, played electronics in Speaker/Cranker, was a touring bassist in Disengage, a touring guitarist in Pere Ubu, and played with Rhys Chatham in his Guitar Trio All-Stars. His music has been appraised by Julian Cope and licensed for Chrysler. David’s current and longest running band is Terminal Lovers. He is also currently active with soundscape artists Blind Spring and releases solo music as David Cintron. His current release is David Cintron – Leroy Rides Again, available on bandcamp and most streaming platforms. R

This is a quarterly publication with articles on life experiences, enjoying the positive, dealing with the negative, art, particularly Art Nouveau, history and a little humor. 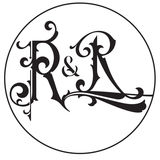