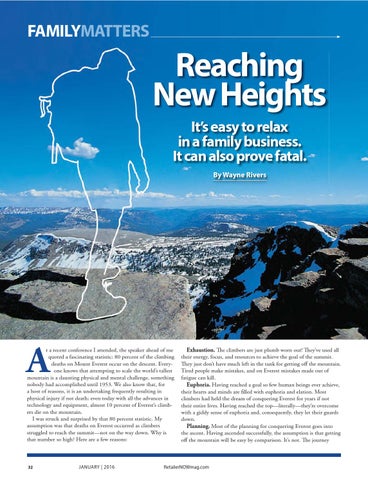 Reaching New Heights It’s easy to relax in a family business. It can also prove fatal. By Wayne Rivers

t a recent conference I attended, the speaker ahead of me quoted a fascinating statistic: 80 percent of the climbing deaths on Mount Everest occur on the descent. Everyone knows that attempting to scale the world’s tallest mountain is a daunting physical and mental challenge, something nobody had accomplished until 1953. We also know that, for a host of reasons, it is an undertaking frequently resulting in physical injury if not death; even today with all the advances in technology and equipment, almost 10 percent of Everest’s climbers die on the mountain. I was struck and surprised by that 80 percent statistic. My assumption was that deaths on Everest occurred as climbers struggled to reach the summit—not on the way down. Why is that number so high? Here are a few reasons:

Exhaustion. The climbers are just plumb worn out! They’ve used all their energy, focus, and resources to achieve the goal of the summit. They just don’t have much left in the tank for getting off the mountain. Tired people make mistakes, and on Everest mistakes made out of fatigue can kill. Euphoria. Having reached a goal so few human beings ever achieve, their hearts and minds are filled with euphoria and elation. Most climbers had held the dream of conquering Everest for years if not their entire lives. Having reached the top—literally—they’re overcome with a giddy sense of euphoria and, consequently, they let their guards down. Planning. Most of the planning for conquering Everest goes into the ascent. Having ascended successfully, the assumption is that getting off the mountain will be easy by comparison. It’s not. The journey 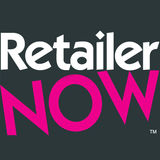