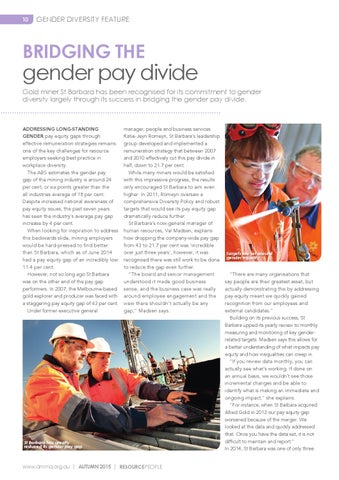 ADDRESSING LONG-STANDING GENDER pay equity gaps through effective remuneration strategies remains one of the key challenges for resource employers seeking best practice in workplace diversity. The ABS estimates the gender pay gap of the mining industry is around 24 per cent, or six points greater than the all industries average of 18 per cent. Despite increased national awareness of pay equity issues, the past seven years has seen the industry’s average pay gap increase by 4 per cent. When looking for inspiration to address this backwards slide, mining employers would be hard-pressed to find better than St Barbara, which as of June 2014 had a pay equity gap of an incredibly low 11.4 per cent. However, not so long ago St Barbara was on the other end of the pay gap performers. In 2007, the Melbourne-based gold explorer and producer was faced with a staggering pay equity gap of 43 per cent. Under former executive general

manager, people and business services Katie-Jeyn Romeyn, St Barbara’s leadership group developed and implemented a remuneration strategy that between 2007 and 2010 effectively cut this pay divide in half, down to 21.7 per cent. While many miners would be satisfied with this impressive progress, the results only encouraged St Barbara to aim even higher. In 2011, Romeyn oversaw a comprehensive Diversity Policy and robust targets that would see its pay equity gap dramatically reduce further. St Barbara’s now-general manager of human resources, Val Madsen, explains how dropping the company-wide pay gap from 43 to 21.7 per cent was ‘incredible over just three years’, however, it was recognised there was still work to be done to reduce the gap even further. “The board and senior management understood it made good business sense, and the business case was really around employee engagement and the view there shouldn’t actually be any gap,” Madsen says.

Targets are set around gender equality

“There are many organisations that say people are their greatest asset, but actually demonstrating this by addressing pay equity meant we quickly gained recognition from our employees and external candidates.” Building on its previous success, St Barbara upped its yearly review to monthly measuring and monitoring of key genderrelated targets. Madsen says this allows for a better understanding of what impacts pay equity and how inequalities can creep in. “If you review data monthly, you can actually see what’s working. If done on an annual basis, we wouldn’t see those incremental changes and be able to identify what is making an immediate and ongoing impact,” she explains. “For instance, when St Barbara acquired Allied Gold in 2012 our pay equity gap worsened because of the merger. We looked at the data and quickly addressed that. Once you have the data set, it is not difficult to maintain and report.” In 2014, St Barbara was one of only three 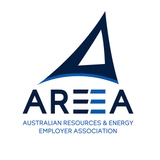