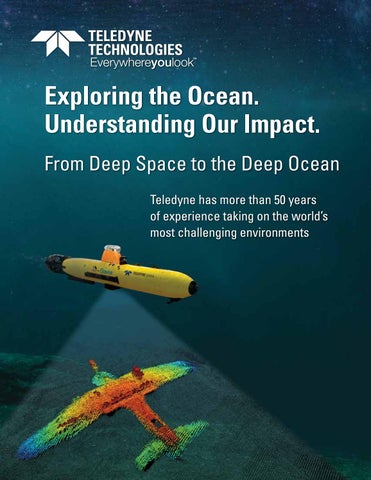 Exploring the Ocean. Understanding Our Impact. From Deep Space to the Deep Ocean Teledyne has more than 50 years of experience taking on the worldâ&amp;#x20AC;&amp;#x2122;s most challenging environments

Exploring the Ocean– Sensing with Sound

he far reaches of space and the depths of Earth’s oceans have much in common, including challenging environments, geologic histories, and the need for extraordinary reliability. Both deep space and the deep ocean are also still largely unexplored. Exploring space primarily depends on our ability to detect electromagnetic radiation (light). Teledyne provides the world’s most sensitive ultraviolet, visible, and infrared image sensors for space- and land-based telescopes that scientists employ to study deep space, the solar system, and our own planet. We also provide LIDAR systems, which scan objects with laser beams to capture three dimensional images and measurements for space, airborne, terrestrial, and marine applications. The vast reaches of the ocean, however, are 2 / TELEDYNE TECHNOLOGIES

nearly impenetrable by optical sensors because electromagnetic radiation is highly attenuated by seawater. While we provide scientists with cameras and lights that scientists employ on subsea vehicles, and LIDAR systems that map the seafloor near coastlines, the working distances of these systems are only a few tens of meters. We therefore need other sensors for subsea imaging that can make accurate images and measurements over distances of multiple kilometers. Acoustic waves (audible sound and ultrasound) do propagate well through seawater. Sonar systems transmit acoustic energy through the water towards objects of interest. The waves are reflected by the objects and return to the sonar where they are processed into images such as the topography of the seafloor or underwater pilings supporting bridges.

While sonars perform functions similar to optical telescopes and LIDAR systems, there is a fundamental difference in the underlying physics. As is evident in a thunderstorm when lightning is visible well before thunder is heard, acoustic waves travel much more slowly than electromagnetic waves. The speed of sound in seawater is approximately 1,500 meters per second while the speed of light is approximately 300 million meters per second, which is 200,000 times faster. This vastly slower speed is, ironically, what makes sonar imaging practical. The physical size of a sonar receiver is directly related to the wavelength of the signal being measured. Electromagnetic and acoustic signals conform to the equation: velocity = frequency x wavelength. Subsea imaging is primarily performed

with acoustic waves at frequencies from 10 kilohertz to more than 2 megahertz. Thus, for an acoustic signal at 600 kilohertz in seawater, the wavelength is 0.25 centimeter. For comparison, an electromagnetic wave at 600 kilohertz is in the AM radio band and has a wavelength of 500 meters. The optimal height for an AM radio tower at this frequency is 125 meters. Given the short wavelength for the acoustic wave, it becomes possible to combine BELOW: Teledyne’s LIDAR, sonar, and software systems produced this fused 3D image of a bridge’s superstructure, underwater pilings, and bay floor in San Diego, CA.

multiple acoustic sensors into a two-dimensional array that will produce multiple beams with an angular resolution of 1 degree or less. Such arrays perform the same function as lenses or mirrors in optical telescopes. A good analogy is medical ultrasound where multiple ultrasonic sensors are combined in a handheld array that focuses the acoustic energy and allows physicians to see a high resolution image of internal organs. Teledyne’s broad portfolio of imaging sonars behave in a manner similar to medical ultrasound, but operate over much greater

distances, ranging from surveying underwater structures from a few meters distance to mapping the seafloor at the full ocean depth of nearly 11 kilometers. Some of Teledyne’s newest and most innovative systems combine our LIDAR, sonar, and imaging software into a complete system that produces full threedimensional images and measurements above and below the waterline of bridges, canals, and harbors–like the image below.

A Journey to the Deep Oceans Teledyne’s Marine Technologies are

he ocean covers over 70 percent of the earth’s surface, holds 97 percent of its water, produces more than half the world’s oxygen, and stores 50 times more carbon dioxide than Earth’s atmosphere. Changes in the ocean affect weather patterns, climate, and food security. Despite the vital importance of the ocean, more than 80 percent of our ocean is unmapped and unexplored. The complexity of the world’s oceans poses challenges for scientists who must assess myriad data on physical parameters including temperature, density, pressure, waves, currents, and tides. Biologists study species ranging from tiny microbes to the largest blue whales. Geologists focus on the structure and evolution of the ocean basins and include features such as hydrothermal vents. Ultimately, all these fields are highly interdisciplinary. 4 / TELEDYNE TECHNOLOGIES

Ocean Science Our technologies for ocean science are truly EverywhereYouLook, from pole to pole, in every ocean, on research ships, on the seafloor and sea surface, and operate around the clock with our APEX free-drifting profiling floats that continuously monitor physical parameters of the upper ocean. We provided the technical innovation for Argo, a global array of nearly 4,000 floats that have made more than 2 million ocean profiles, almost four times as many as every other ocean observing tool combined. Our multibeam sonars profile depths from the deep ocean seafloor to harbors and infrastructures below bridges. Our Acoustic Doppler Current Profilers (ADCPs) provide remote sensing of ocean currents from ships, buoys, moorings, and autonomous underwater vehicles. We are the world’s leading supplier

of wet-mate and drymate connectors and cables that are used on subsea observatories, subsea vehicles, and oceanographic instrumentation. Our marine instruments support research with timeframes that range from decades for studying climate change to minutes for enhanced weather forecasts. Our instruments help scientists understand seasonal variations in ocean temperatures and currents that affect fisheries and farms throughout the world. Our current profilers, sonars, interconnect technologies, subsea cameras, navigation systems, hydrophones, acoustic modems, and other marine products originally developed for oceanography are now used extensively in other markets, including infrastructure, defense and security, and energy.

Infrastructure Eroding infrastructure is an increasing concern worldwide. Rising sea levels in coastal areas have made such concerns even more acute. Inspection of bridges, canals, and dams below the waterline can be difficult and time consuming, and may be dangerous for divers, especially in murky waters. Our imaging sonars are increasingly used to scan such infrastructure and our ADCPs are used to monitor currents that may erode structures. Some of our newest systems seamlessly survey both above and below the waterline.

mines, and safely deliver Special Forces divers to their destinations.

Energy Our engineers and research scientists have worked closely with energy companies to develop unique subsea interconnect technologies that provide the utmost reliability for deepwater applications. We have introduced a new sound source for offshore seismic surveys that does not impact marine mammals. Our sonar imaging and interconnect

products are increasingly being used for renewable energy, notably for offshore wind farms. Teledyne is proud to support ocean scientists throughout the world by providing tools that enable them to more rapidly acquire accurate and comprehensive data from above the ocean’s surface to its deepest depths. We invite you to take a journey to the deep oceans through the lens of Teledyne technologies.

Defense and Security Most of the world’s nations have direct coastal access and nearly 2.4 billion people live within 100 kilometers of these coasts. The United Nations Convention on the Law of the Sea established freedomof-navigation rights, set territorial sea boundaries, and created mechanisms to resolve conflicts. Our products for defense and security support naval oceanography, allow navies to detect naval

OPPOSITE: Teledyne current profilers (up and down-looking), after being lowered to the seabed. 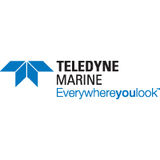