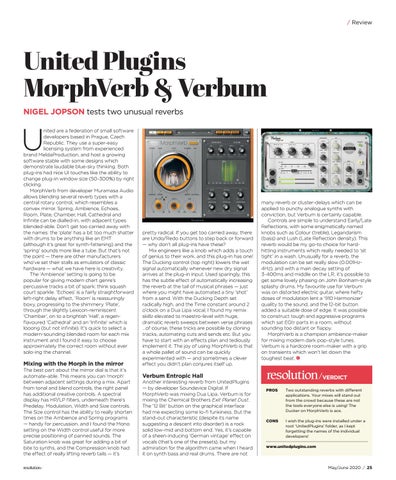 nited are a federation of small software developers based in Prague, Czech Republic. They use a super-easy licensing system from experienced brand MeldaProduction, and host a growing software stable with some designs which demonstrate laudable blue-sky thinking. Both plug-ins had nice UI touches like the ability to change plug-in window size (50-300%) by right clicking. MorphVerb from developer Muramasa Audio allows blending several reverb types with a central rotary control, which resembles a convex mirror. Spring, Ambience, Echoes, Room, Plate, Chamber, Hall, Cathedral and Infinite can be dialled-in, with adjacent types blended-able. Don’t get too carried away with the names: the ‘plate’ has a bit too much shatter with drums to be anything like an EMT (although it’s great for synth-fattening) and the ‘spring’ sounds more like a tube. But that’s not the point — there are other manufacturers who’ve set their stalls as emulators of classic hardware — what we have here is creativity. The ‘Ambience’ setting is going to be popular for giving modern chart genre’s percussive tracks a bit of spark: think squash court sparkle. ‘Echoes’ is a fairly straightforward left-right delay effect, ‘Room’ is reassuringly boxy, progressing to the shimmery ‘Plate’, through the slightly Lexicon-reminiscent ‘Chamber’, on to a brightish ‘Hall’, a regenflavoured ‘Cathedral’ and an ‘Infinite’ which is looong (but not infinite). It’s quick to select a modern-sounding blended room for each mix instrument and I found it easy to choose approximately the correct room without ever solo-ing the channel.

Mixing with the Morph in the mirror

The best part about the mirror dial is that it’s automate-able. This means you can ‘morph’ between adjacent settings during a mix. Apart from tonal and blend controls, the right panel has additional creative controls. A spectral display has HP/LP filters, underneath there’s Predelay, Modulation, Width and Size controls. The Size control has the ability to really shorten times on the Ambience and Spring programs — handy for percussion, and I found the Mono setting on the Width control useful for more precise positioning of panned sounds. The Saturation knob was great for adding a bit of bite to synths, and the Compression knob had the effect of really lifting reverb tails — it’s

pretty radical. If you get too carried away, there are Undo/Redo buttons to step back or forward — why don’t all plug-ins have these? Mix engineers like a knob which adds a touch of genius to their work, and this plug-in has one! The Ducking control (top right) lowers the wet signal automatically whenever new dry signal arrives at the plug-in input. Used sparingly, this has the subtle effect of automatically increasing the reverb at the tail of musical phrases — just where you might have automated a tiny ‘shot’ from a send. With the Ducking Depth set radically high, and the Time constant around 2 o’clock on a Dua Lipa vocal, I found my remix skillz elevated to maestro-level with huge, dramatic reverb sweeps between verse phrases …of course, these tricks are possible by cloning tracks, automating cuts and sends etc. But you have to start with an effects plan and tediously implement it. The joy of using MorphVerb is that a whole pallet of sound can be quickly experimented with — and sometimes a clever effect you didn’t plan conjures itself up.

many reverb or cluster-delays which can be applied to punchy analogue synths with conviction, but Verbum is certainly capable. Controls are simple to understand Early/Late Reflections, with some enigmatically named knobs such as Colour (treble), Legandarism (bass) and Lush (Late Reflection density). This reverb would be my go-to choice for hardhitting instruments which really needed to ‘sit tight’ in a wash. Unusually for a reverb, the modulation can be set really slow (0.001Hz4Hz), and with a main decay setting of 3-400ms and middle on the LR, it’s possible to get some lovely phasing on John Bonham-style splashy drums. My favourite use for Verbum was on distorted electric guitar, where hefty doses of modulation lent a ‘910 Harmonizer’ quality to the sound, and the 12-bit button added a suitable dose of edge. It was possible to construct tough and aggressive programs which sat EGtr parts in a room, without sounding too distant or flappy. MorphVerb is a champion ambience-maker for mixing modern dark pop-style tunes. Verbum is a hardcore room-maker with a grip on transients which won’t let down the toughest beat.

Another interesting reverb from UnitedPlugins — by developer Soundevice Digital. If MorphVerb was mixing Dua Lipa, Verbum is for mixing the Chemical Brothers Exit Planet Dust. The ‘12 Bit’ button on the graphical interface had me expecting some lo-fi funkiness. But the stand-out characteristic (despite its name suggesting a descent into disorder) is a rock solid low-mid and bottom end. Yes, it’s capable of a sheen-inducing ‘German vintage’ effect on vocals (that’s one of the presets), but my admiration for the algorithm came when I heard it on synth bass and real drums. There are not

Two outstanding reverbs with different applications. Your mixes will stand out from the crowd because these are not the tools everyone else is using! The Ducker on MorphVerb is ace.

I wish the plug-ins were installed under a root ‘UnitedPlugins’ folder, as I kept forgetting the names of the individual developers!