Report from the Capital: September/October 2017 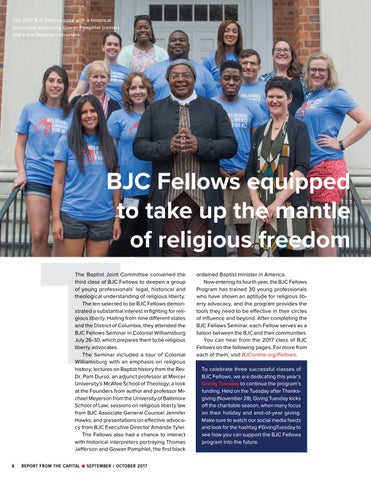 BJC Fellows equipped to take up the mantle of religious freedom

The Baptist Joint Committee convened the third class of BJC Fellows to deepen a group of young professionals’ legal, historical and theological understanding of religious liberty. The ten selected to be BJC Fellows demonstrated a substantial interest in fighting for religious liberty. Hailing from nine different states and the District of Columbia, they attended the BJC Fellows Seminar in Colonial Williamsburg July 26-30, which prepares them to be religious liberty advocates. The Seminar included a tour of Colonial Williamsburg with an emphasis on religious history; lectures on Baptist history from the Rev. Dr. Pam Durso, an adjunct professor at Mercer University’s McAfee School of Theology; a look at the Founders from author and professor Michael Meyerson from the University of Baltimore School of Law; sessions on religious liberty law from BJC Associate General Counsel Jennifer Hawks; and presentations on effective advocacy from BJC Executive Director Amanda Tyler. The Fellows also had a chance to interact with historical interpreters portraying Thomas Jefferson and Gowan Pamphlet, the first black

REPORT FROM THE CAPITAL ■ SEPTEMBER / OCTOBER 2017

ordained Baptist minister in America. Now entering its fourth year, the BJC Fellows Program has trained 30 young professionals who have shown an aptitude for religious liberty advocacy, and the program provides the tools they need to be effective in their circles of influence and beyond. After completing the BJC Fellows Seminar, each Fellow serves as a liaison between the BJC and their communities. You can hear from the 2017 class of BJC Fellows on the following pages. For more from each of them, visit BJConline.org/Fellows. To celebrate three successful classes of BJC Fellows, we are dedicating this year’s Giving Tuesday to continue the program’s funding. Held on the Tuesday after Thanksgiving (November 28), Giving Tuesday kicks off the charitable season, when many focus on their holiday and end-of-year giving. Make sure to watch our social media feeds and look for the hashtag #GivingTuesday to see how you can support the BJC Fellows program into the future.

Report from the Capital: September/October 2017

Learn how you can raise your voice for religious liberty in this issue. BJC Executive Director Amanda Tyler discusses the importance of standing up for religious liberty, and the BJC Fellows share important lessons learned at Colonial Williamsburg. Plus, General Counsel Holly Hollman analyzes the Masterpiece Cakeshop case, our essay contest winner shares from her experiences, and more. 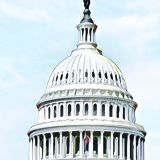