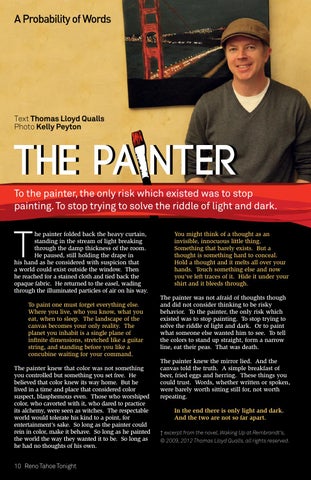 the pa nter hgvjhgvjhgv To the painter, the only risk which existed was to stop painting. To stop trying to solve the riddle of light and dark.

he painter folded back the heavy curtain, standing in the stream of light breaking through the damp thickness of the room. He paused, still holding the drape in his hand as he considered with suspicion that a world could exist outside the window. Then he reached for a stained cloth and tied back the opaque fabric. He returned to the easel, wading through the illuminated particles of air on his way. To paint one must forget everything else. Where you live, who you know, what you eat, when to sleep. The landscape of the canvas becomes your only reality. The planet you inhabit is a single plane of infinite dimensions, stretched like a guitar string, and standing before you like a concubine waiting for your command. The painter knew that color was not something you controlled but something you set free. He believed that color knew its way home. But he lived in a time and place that considered color suspect, blasphemous even. Those who worshiped color, who cavorted with it, who dared to practice its alchemy, were seen as witches. The respectable world would tolerate his kind to a point, for entertainment’s sake. So long as the painter could rein in color, make it behave. So long as he painted the world the way they wanted it to be. So long as he had no thoughts of his own. 10 Reno Tahoe Tonight

You might think of a thought as an invisible, innocuous little thing. Something that barely exists. But a thought is something hard to conceal. Hold a thought and it melts all over your hands. Touch something else and now you’ve left traces of it. Hide it under your shirt and it bleeds through. The painter was not afraid of thoughts though and did not consider thinking to be risky behavior. To the painter, the only risk which existed was to stop painting. To stop trying to solve the riddle of light and dark. Or to paint what someone else wanted him to see. To tell the colors to stand up straight, form a narrow line, eat their peas. That was death. The painter knew the mirror lied. And the canvas told the truth. A simple breakfast of beer, fried eggs and herring. These things you could trust. Words, whether written or spoken, were barely worth sitting still for, not worth repeating. In the end there is only light and dark. And the two are not so far apart. † excerpt from the novel, Waking Up at Rembrandt&#39;s, © 2009, 2012 Thomas Lloyd Qualls, all rights reserved.