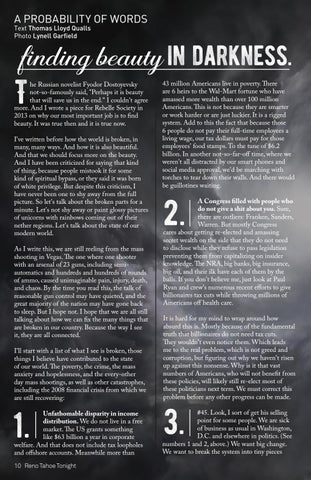 he Russian novelist Fyodor Dostoyevsky not-so-famously said, "Perhaps it is beauty that will save us in the end." I couldn't agree more. And I wrote a piece for Rebelle Society in 2013 on why our most important job is to find beauty. It was true then and it is true now.

I've written before how the world is broken, in many, many ways. And how it is also beautiful. And that we should focus more on the beauty. And I have been criticized for saying that kind of thing, because people mistook it for some kind of spiritual bypass, or they said it was born of white privilege. But despite this criticism, I have never been one to shy away from the full picture. So let's talk about the broken parts for a minute. Let's not shy away or paint glossy pictures of unicorns with rainbows coming out of their nether regions. Let's talk about the state of our modern world. As I write this, we are still reeling from the mass shooting in Vegas. The one where one shooter with an arsenal of 23 guns, including semiautomatics and hundreds and hundreds of rounds of ammo, caused unimaginable pain, injury, death, and chaos. By the time you read this, the talk of reasonable gun control may have quieted, and the great majority of the nation may have gone back to sleep. But I hope not. I hope that we are all still talking about how we can fix the many things that are broken in our country. Because the way I see it, they are all connected. I'll start with a list of what I see is broken, those things I believe have contributed to the state of our world. The poverty, the crime, the mass anxiety and hopelessness, and the every-other day mass shootings, as well as other catastrophes, including the 2008 financial crisis from which we are still recovering:

Unfathomable disparity in income distribution. We do not live in a free market. The US grants something like $63 billion a year in corporate welfare. And that does not include tax loopholes and offshore accounts. Meanwhile more than 10 Reno Tahoe Tonight

43 million Americans live in poverty. There are 6 heirs to the Wal-Mart fortune who have amassed more wealth than over 100 million Americans. This is not because they are smarter or work harder or are just luckier. It is a rigged system. Add to this the fact that because those 6 people do not pay their full-time employees a living wage, our tax dollars must pay for those employees' food stamps. To the tune of $6.2 billion. In another not-so-far-off time, where we weren't all distracted by our smart phones and social media approval, we'd be marching with torches to tear down their walls. And there would be guillotines waiting.

A Congress filled with people who do not give a shit about you. Sure, there are outliers: Franken, Sanders, Warren. But mostly Congress cares about getting re-elected and amassing secret wealth on the side that they do not need to disclose while they refuse to pass legislation preventing them from capitalizing on insider knowledge. The NRA, big banks, big insurance, big oil, and their ilk have each of them by the balls. If you don't believe me, just look at Paul Ryan and crew's numerous recent efforts to give billionaires tax cuts while throwing millions of Americans off health care. It is hard for my mind to wrap around how absurd this is. Mostly because of the fundamental truth that billionaires do not need tax cuts. They wouldn't even notice them. Which leads me to the real problem, which is not greed and corruption, but figuring out why we haven't risen up against this nonsense. Why is it that vast numbers of Americans, who will not benefit from these policies, will likely still re-elect most of these politicians next term. We must correct this problem before any other progress can be made.

#45. Look, I sort of get his selling point for some people. We are sick of business as usual in Washington, D.C. and elsewhere in politics. (See numbers 1 and 2, above.) We want big change. We want to break the system into tiny pieces