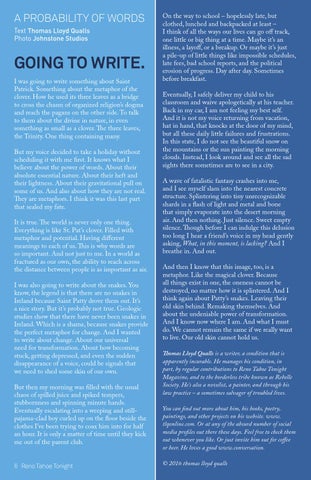 GOING TO WRITE. I was going to write something about Saint Patrick. Something about the metaphor of the clover. How he used its three leaves as a bridge to cross the chasm of organized religion’s dogma and reach the pagans on the other side. To talk to them about the divine in nature, in even something as small as a clover. The three leaves, the Trinity. One thing containing many. But my voice decided to take a holiday without scheduling it with me first. It knows what I believe about the power of words. About their absolute essential nature. About their heft and their lightness. About their gravitational pull on some of us. And also about how they are not real. They are metaphors. I think it was this last part that sealed my fate. It is true. The world is never only one thing. Everything is like St. Pat’s clover. Filled with metaphor and potential. Having different meanings to each of us. This is why words are so important. And not just to me. In a world as fractured as our own, the ability to reach across the distance between people is as important as air. I was also going to write about the snakes. You know, the legend is that there are no snakes in Ireland because Saint Patty drove them out. It’s a nice story. But it’s probably not true. Geologic studies show that there have never been snakes in Ireland. Which is a shame, because snakes provide the perfect metaphor for change. And I wanted to write about change. About our universal need for transformation. About how becoming stuck, getting depressed, and even the sudden disappearance of a voice, could be signals that we need to shed some skin of our own. But then my morning was filled with the usual chaos of spilled juice and spiked tempers, stubbornness and spinning minute hands. Eventually escalating into a weeping and stillpajama-clad boy curled up on the floor beside the clothes I’ve been trying to coax him into for half an hour. It is only a matter of time until they kick me out of the parent club. 6 Reno Tahoe Tonight

On the way to school – hopelessly late, but clothed, lunched and backpacked at least – I think of all the ways our lives can go off track, one little or big thing at a time. Maybe it’s an illness, a layoff, or a breakup. Or maybe it’s just a pile-up of little things like impossible schedules, late fees, bad school reports, and the political erosion of progress. Day after day. Sometimes before breakfast. Eventually, I safely deliver my child to his classroom and waive apologetically at his teacher. Back in my car, I am not feeling my best self. And it is not my voice returning from vacation, hat in hand, that knocks at the door of my mind, but all these daily little failures and frustrations. In this state, I do not see the beautiful snow on the mountains or the sun painting the morning clouds. Instead, I look around and see all the sad sights there sometimes are to see in a city. A wave of fatalistic fantasy crashes into me, and I see myself slam into the nearest concrete structure. Splintering into tiny unrecognizable shards in a flash of light and metal and bone that simply evaporate into the desert morning air. And then nothing. Just silence. Sweet empty silence. Though before I can indulge this delusion too long I hear a friend’s voice in my head gently asking, What, in this moment, is lacking? And I breathe in. And out. And then I know that this image, too, is a metaphor. Like the magical clover. Because all things exist in one, the oneness cannot be destroyed, no matter how it is splintered. And I think again about Patty’s snakes. Leaving their old skin behind. Remaking themselves. And about the undeniable power of transformation. And I know now where I am. And what I must do. We cannot remain the same if we really want to live. Our old skin cannot hold us. Thomas Lloyd Qualls is a writer, a condition that is apparently incurable. He manages his condition, in part, by regular contributions to Reno Tahoe Tonight Magazine, and to the borderless tribe known as Rebelle Society. He's also a novelist, a painter, and through his law practice – a sometimes salvager of troubled lives. You can find out more about him, his books, poetry, paintings, and other projects on his website. www. tlqonline.com. Or at any of the absurd number of social media profiles out there these days. Feel free to check them out whenever you like. Or just invite him out for coffee or beer. He loves a good www.conversation. © 2016 thomas lloyd qualls