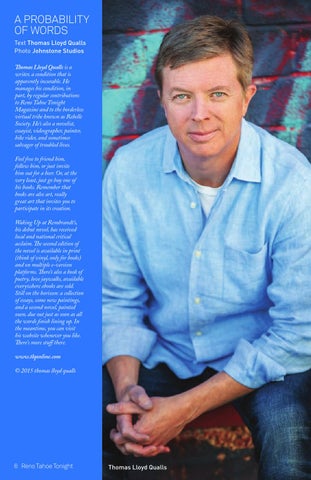 A PROBABILITY OF WORDS Text Thomas Lloyd Qualls Photo Johnstone Studios Thomas Lloyd Qualls is a writer, a condition that is apparently incurable. He manages his condition, in part, by regular contributions to Reno Tahoe Tonight Magazine and to the borderless virtual tribe known as Rebelle Society. He’s also a novelist, essayist, videographer, painter, bike rider, and sometimes salvager of troubled lives. Feel free to friend him, follow him, or just invite him out for a beer. Or, at the very least, just go buy one of his books. Remember that books are also art, really great art that invites you to participate in its creation. Waking Up at Rembrandt’s, his debut novel, has received local and national critical acclaim. The second edition of the novel is available in print (think of vinyl, only for books) and on multiple e-version platforms. There’s also a book of poetry, love jaywalks, available everywhere ebooks are sold. Still on the horizon: a collection of essays, some new paintings, and a second novel, painted oxen, due out just as soon as all the words finish lining up. In the meantime, you can visit his website whenever you like. There's more stuff there. www.tlqonline.com © 2015 thomas lloyd qualls