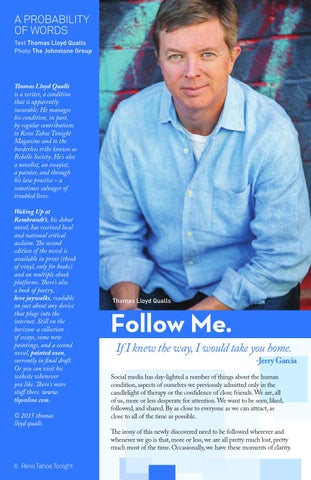 Thomas Lloyd Qualls is a writer, a condition that is apparently incurable. He manages his condition, in part, by regular contributions to Reno Tahoe Tonight Magazine and to the borderless tribe known as Rebelle Society. He's also a novelist, an essayist, a painter, and through his law practice – a sometimes salvager of troubled lives. Waking Up at Rembrandt’s, his debut novel, has received local and national critical acclaim. The second edition of the novel is available in print (think of vinyl, only for books) and on multiple ebook platforms. There’s also a book of poetry, love jaywalks, readable on just about any device that plugs into the internet. Still on the horizon: a collection of essays, some new paintings, and a second novel, painted oxen, currently in final draft. Or you can visit his website whenever you like. There's more stuff there. www. tlqonline.com. © 2015 thomas lloyd qualls

Follow Me. If I knew the way, I would take you home.

Social media has day-lighted a number of things about the human condition, aspects of ourselves we previously admitted only in the candlelight of therapy or the confidence of close friends. We are, all of us, more or less desperate for attention. We want to be seen, liked, followed, and shared. By as close to everyone as we can attract, as close to all of the time as possible. The irony of this newly discovered need to be followed wherever and whenever we go is that, more or less, we are all pretty much lost, pretty much most of the time. Occasionally, we have these moments of clarity.