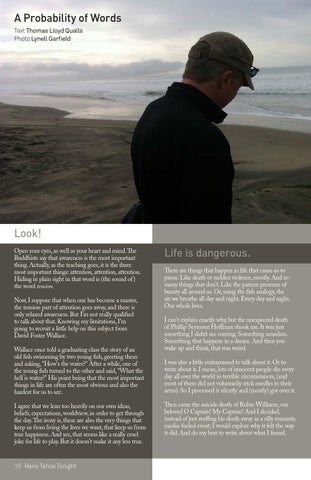 Look! Open your eyes, as well as your heart and mind. The Buddhists say that awareness is the most important thing. Actually, as the teaching goes, it is the three most important things: attention, attention, attention. Hiding in plain sight in that word is (the sound of ) the word tension. Now, I suppose that when one has become a master, the tension part of attention goes away, and there is only relaxed awareness. But I&#39;m not really qualified to talk about that. Knowing my limitations, I&#39;m going to recruit a little help on this subject from David Foster Wallace. Wallace once told a graduating class the story of an old fish swimming by two young fish, greeting them and asking, &quot;How&#39;s the water?&quot; After a while, one of the young fish turned to the other and said, &quot;What the hell is water?&quot; His point being that the most important things in life are often the most obvious and also the hardest for us to see. I agree that we lean too heavily on our own ideas, beliefs, expectations, worldview, in order to get through the day. The irony is, these are also the very things that keep us from living the lives we want, that keep us from true happiness. And yes, that seems like a really cruel joke for life to play. But it doesn&#39;t make it any less true. 10 Reno Tahoe Tonight

Life is dangerous. There are things that happen in life that cause us to pause. Like death or sudden violence, mostly. And so many things that don&#39;t. Like the patient presence of beauty all around us. Or, using the fish analogy, the air we breathe all day and night. Every day and night. Our whole lives. I can&#39;t explain exactly why, but the unexpected death of Phillip Seymour Hoffman shook me. It was just something I didnâ&amp;#x20AC;&amp;#x2122;t see coming. Something senseless. Something that happens in a dream. And then you wake up and think, that was weird. I was also a little embarrassed to talk about it. Or to write about it. I mean, lots of innocent people die every day all over the world in terrible circumstances, (and most of them did not voluntarily stick needles in their arms). So I processed it silently and (mostly) got over it. Then came the suicide death of Robin Williams, our beloved O Captain! My Captain! And I decided, instead of just stuffing his death away as a silly romantic media-fueled event, I would explore why it felt the way it did. And do my best to write about what I found.