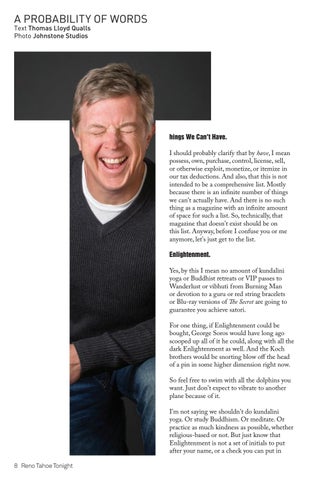 hings We Can&#39;t Have. I should probably clarify that by have, I mean possess, own, purchase, control, license, sell, or otherwise exploit, monetize, or itemize in our tax deductions. And also, that this is not intended to be a comprehensive list. Mostly because there is an infinite number of things we can&#39;t actually have. And there is no such thing as a magazine with an infinite amount of space for such a list. So, technically, that magazine that doesn&#39;t exist should be on this list. Anyway, before I confuse you or me anymore, let&#39;s just get to the list. Enlightenment. Yes, by this I mean no amount of kundalini yoga or Buddhist retreats or VIP passes to Wanderlust or vibhuti from Burning Man or devotion to a guru or red string bracelets or Blu-ray versions of The Secret are going to guarantee you achieve satori. For one thing, if Enlightenment could be bought, George Soros would have long ago scooped up all of it he could, along with all the dark Enlightenment as well. And the Koch brothers would be snorting blow off the head of a pin in some higher dimension right now. So feel free to swim with all the dolphins you want. Just don&#39;t expect to vibrate to another plane because of it. I&#39;m not saying we shouldn&#39;t do kundalini yoga. Or study Buddhism. Or meditate. Or practice as much kindness as possible, whether religious-based or not. But just know that Enlightenment is not a set of initials to put after your name, or a check you can put in 8 Reno Tahoe Tonight