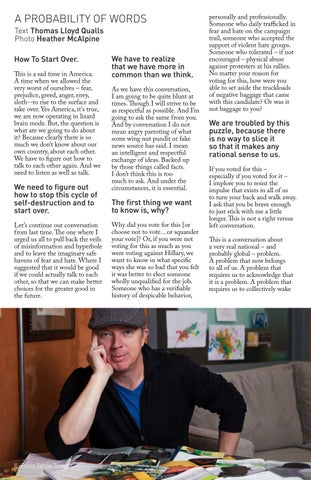 A PROBABILITY OF WORDS Text Thomas Lloyd Qualls Photo Heather McAlpine How To Start Over. This is a sad time in America. A time when we allowed the very worst of ourselves – fear, prejudice, greed, anger, envy, sloth--to rise to the surface and take over. Yes America, it&#39;s true, we are now operating in lizard brain mode. But, the question is what are we going to do about it? Because clearly there is so much we don’t know about our own country, about each other. We have to figure out how to talk to each other again. And we need to listen as well as talk.

We need to figure out how to stop this cycle of self-destruction and to start over. Let’s continue our conversation from last time. The one where I urged us all to pull back the veils of misinformation and hyperbole and to leave the imaginary safe havens of fear and hate. Where I suggested that it would be good if we could actually talk to each other, so that we can make better choices for the greater good in the future.

We have to realize that we have more in common than we think. As we have this conversation, I am going to be quite blunt at times. Though I will strive to be as respectful as possible. And I’m going to ask the same from you. And by conversation I do not mean angry parroting of what some wing nut pundit or fake news source has said. I mean an intelligent and respectful exchange of ideas. Backed up by those things called facts. I don’t think this is too much to ask. And under the circumstances, it is essential.

The first thing we want to know is, why? Why did you vote for this [or choose not to vote…or squander your vote]? Or, if you were not voting for this as much as you were voting against Hillary, we want to know in what specific ways she was so bad that you felt it was better to elect someone wholly unqualified for the job. Someone who has a verifiable history of despicable behavior,

personally and professionally. Someone who daily trafficked in fear and hate on the campaign trail, someone who accepted the support of violent hate groups. Someone who tolerated – if not encouraged – physical abuse against protesters at his rallies. No matter your reason for voting for this, how were you able to set aside the truckloads of negative baggage that came with this candidate? Or was it not baggage to you?

We are troubled by this puzzle, because there is no way to slice it so that it makes any rational sense to us. If you voted for this – especially if you voted for it – I implore you to resist the impulse that exists in all of us to turn your back and walk away. I ask that you be brave enough to just stick with me a little longer. This is not a right versus left conversation. This is a conversation about a very real national – and probably global – problem. A problem that now belongs to all of us. A problem that requires us to acknowledge that it is a problem. A problem that requires us to collectively wake