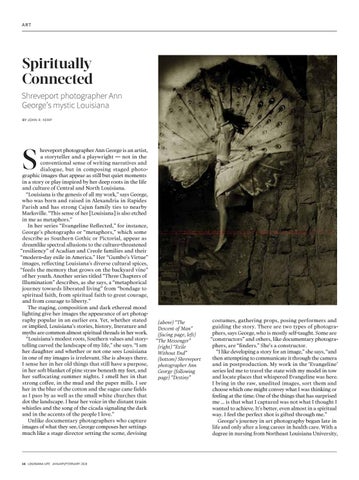 hreveport photographer Ann George is an artist, a storyteller and a playwright — not in the conventional sense of writing narratives and dialogue, but in composing staged photographic images that appear as still but quiet moments in a story or play inspired by her deep roots in the life and culture of Central and North Louisiana. “Louisiana is the genesis of all my work,” says George, who was born and raised in Alexandria in Rapides Parish and has strong Cajun family ties to nearby Marksville. “This sense of her [Louisiana] is also etched in me as metaphors.” In her series “Evangeline Reflected,” for instance, George’s photographs or “metaphors,” which some describe as Southern Gothic or Pictorial, appear as dreamlike spectral allusions to the culture-threatened “resiliency” of Acadian and Creole families and their “modern-day exile in America.” Her “Gumbo’s Virtue” images, reflecting Louisiana’s diverse cultural spices, “feeds the memory that grows on the backyard vine” of her youth. Another series titled “Three Chapters of Illumination” describes, as she says, a “metaphorical journey towards liberated living” from “bondage to spiritual faith, from spiritual faith to great courage, and from courage to liberty.” The staging, composition and dark ethereal mood lighting give her images the appearance of art photography popular in an earlier era. Yet, whether stated or implied, Louisiana’s stories, history, literature and myths are common almost spiritual threads in her work. “Louisiana’s modest roots, Southern values and storytelling carved the landscape of my life,” she says. “I am her daughter and whether or not one sees Louisiana in one of my images is irrelevant. She is always there. I sense her in her old things that still have a purpose, in her soft blanket of pine straw beneath my feet, and her suffocating summer nights. I smell her in that strong coffee, in the mud and the paper mills. I see her in the blur of the cotton and the sugar cane fields as I pass by as well as the small white churches that dot the landscape. I hear her voice in the distant train whistles and the song of the cicada signaling the dark and in the accents of the people I love.” Unlike documentary photographers who capture images of what they see, George composes her settings much like a stage director setting the scene, devising

costumes, gathering props, posing performers and guiding the story. There are two types of photographers, says George, who is mostly self-taught. Some are “constructors” and others, like documentary photographers, are “finders.” She’s a constructor. “I like developing a story for an image,” she says, “and then attempting to communicate it through the camera and in postproduction. My work in the ‘Evangeline’ series led me to travel the state with my model in tow and locate places that whispered Evangeline was here. I bring in the raw, unedited images, sort them and choose which one might convey what I was thinking or feeling at the time. One of the things that has surprised me ... is that what I captured was not what I thought I wanted to achieve. It’s better, even almost in a spiritual way. I feel the perfect shot is gifted through me.” George’s journey in art photography began late in life and only after a long career in health care. With a degree in nursing from Northeast Louisiana University, 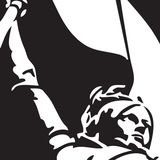