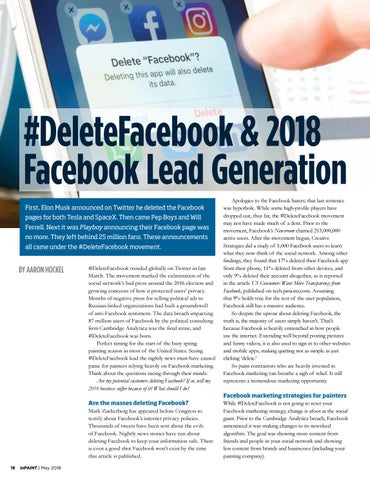 #DeleteFacebook &amp; 2018 Facebook Lead Generation First, Elon Musk announced on Twitter he deleted the Facebook pages for both Tesla and SpaceX. Then came Pep Boys and Will Ferrell. Next it was Playboy announcing their Facebook page was no more. They left behind 25 million fans. These announcements all came under the #DeleteFacebook movement.

#DeleteFacebook trended globally on Twitter in late March. The movement marked the culmination of the social network’s bad press around the 2016 election and growing concerns of how it protected users’ privacy. Months of negative press for selling political ads to Russian-linked organizations had built a groundswell of anti-Facebook sentiment. The data breach impacting 87 million users of Facebook by the political consulting firm Cambridge Analytica was the final straw, and #DeleteFacebook was born. Perfect timing for the start of the busy spring painting season in most of the United States. Seeing #DeleteFacebook lead the nightly news must have caused panic for painters relying heavily on Facebook marketing. Think about the questions racing through their minds: Are my potential customers deleting Facebook? If so, will my 2018 business suffer because of it? What should I do? Are the masses deleting Facebook? Mark Zuckerberg has appeared before Congress to testify about Facebook’s internet privacy policies. Thousands of tweets have been sent about the evils of Facebook. Nightly news stories have run about deleting Facebook to keep your information safe. There is even a good shot Facebook won’t exist by the time this article is published.

Apologies to the Facebook haters; that last sentence was hyperbole. While some high-profile players have dropped out, thus far, the #DeleteFacebook movement may not have made much of a dent. Prior to the movement, Facebook’s Newsroom claimed 213,000,000 active users. After the movement began, Creative Strategies did a study of 1,000 Facebook users to learn what they now think of the social network. Among other findings, they found that 17% deleted their Facebook app from their phone, 11% deleted from other devices, and only 9% deleted their account altogether, as is reported in the article US Consumers Want More Transparency from Facebook, published on tech.pinions.com. Assuming that 9% holds true for the rest of the user population, Facebook still has a massive audience. So despite the uproar about deleting Facebook, the truth is, the majority of users simply haven’t. That’s because Facebook is heavily entrenched in how people use the internet. Extending well beyond posting pictures and funny videos, it is also used to sign in to other websites and mobile apps, making quitting not as simple as just clicking ‘delete.’ So paint contractors who are heavily invested in Facebook marketing can breathe a sigh of relief. It still represents a tremendous marketing opportunity. Facebook marketing strategies for painters While #DeleteFacebook is not going to reset your Facebook marketing strategy, change is afoot at the social giant. Prior to the Cambridge Analytica breach, Facebook announced it was making changes to its newsfeed algorithm. The goal was showing more content from friends and people in your social network and showing less content from brands and businesses (including your painting company).