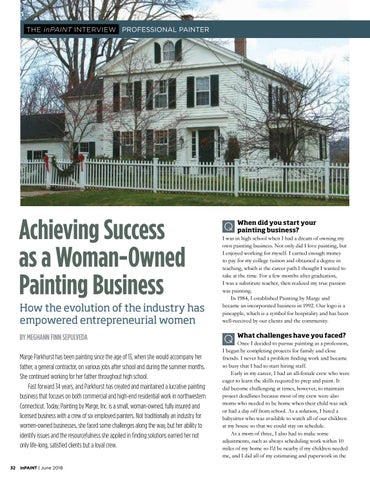 Achieving Success as a Woman-Owned Painting Business How the evolution of the industry has empowered entrepreneurial women BY MEGHANN FINN SEPULVEDA Marge Parkhurst has been painting since the age of 13, when she would accompany her father, a general contractor, on various jobs after school and during the summer months. She continued working for her father throughout high school. Fast forward 34 years, and Parkhurst has created and maintained a lucrative painting business that focuses on both commercial and high-end residential work in northwestern Connecticut. Today, Painting by Marge, Inc. is a small, woman-owned, fully insured and licensed business with a crew of six employed painters. Not traditionally an industry for women-owned businesses, she faced some challenges along the way, but her ability to identify issues and the resourcefulness she applied in finding solutions earned her not only life-long, satisfied clients but a loyal crew. 32

When did you start your painting business?

I was in high school when I had a dream of owning my own painting business. Not only did I love painting, but I enjoyed working for myself. I earned enough money to pay for my college tuition and obtained a degree in teaching, which is the career path I thought I wanted to take at the time. For a few months after graduation, I was a substitute teacher, then realized my true passion was painting. In 1984, I established Painting by Marge and became an incorporated business in 1992. Our logo is a pineapple, which is a symbol for hospitality and has been well-received by our clients and the community.

What challenges have you faced?

Once I decided to pursue painting as a profession, I began by completing projects for family and close friends. I never had a problem finding work and became so busy that I had to start hiring staff. Early in my career, I had an all-female crew who were eager to learn the skills required to prep and paint. It did become challenging at times, however, to maintain project deadlines because most of my crew were also moms who needed to be home when their child was sick or had a day off from school. As a solution, I hired a babysitter who was available to watch all of our children at my house so that we could stay on schedule. As a mom of three, I also had to make some adjustments, such as always scheduling work within 10 miles of my home so Iâ&amp;#x20AC;&amp;#x2122;d be nearby if my children needed me, and I did all of my estimating and paperwork in the