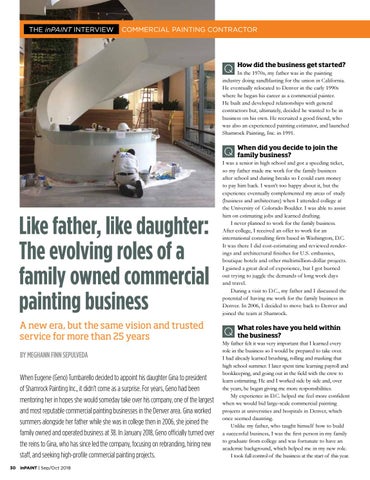 How did the business get started?

When did you decide to join the family business?

In the 1970s, my father was in the painting industry doing sandblasting for the union in California. He eventually relocated to Denver in the early 1990s where he began his career as a commercial painter. He built and developed relationships with general contractors but, ultimately, decided he wanted to be in business on his own. He recruited a good friend, who was also an experienced painting estimator, and launched Shamrock Painting, Inc. in 1991.

Like father, like daughter: The evolving roles of a family owned commercial painting business A new era, but the same vision and trusted service for more than 25 years BY MEGHANN FINN SEPULVEDA When Eugene (Geno) Tumbarello decided to appoint his daughter Gina to president of Shamrock Painting Inc., it didnâ&amp;#x20AC;&amp;#x2122;t come as a surprise. For years, Geno had been mentoring her in hopes she would someday take over his company, one of the largest and most reputable commercial painting businesses in the Denver area. Gina worked summers alongside her father while she was in college then in 2006, she joined the family owned and operated business at 38. In January 2018, Geno officially turned over the reins to Gina, who has since led the company, focusing on rebranding, hiring new staff, and seeking high-profile commercial painting projects. 30

I was a senior in high school and got a speeding ticket, so my father made me work for the family business after school and during breaks so I could earn money to pay him back. I wasnâ&amp;#x20AC;&amp;#x2122;t too happy about it, but the experience eventually complemented my areas of study (business and architecture) when I attended college at the University of Colorado Boulder. I was able to assist him on estimating jobs and learned drafting. I never planned to work for the family business. After college, I received an offer to work for an international consulting firm based in Washington, D.C. It was there I did cost-estimating and reviewed renderings and architectural finishes for U.S. embassies, boutique hotels and other multimillion-dollar projects. I gained a great deal of experience, but I got burned out trying to juggle the demands of long work days and travel. During a visit to D.C., my father and I discussed the potential of having me work for the family business in Denver. In 2006, I decided to move back to Denver and joined the team at Shamrock.

What roles have you held within the business?

My father felt it was very important that I learned every role in the business so I would be prepared to take over. I had already learned brushing, rolling and masking that high school summer. I later spent time learning payroll and bookkeeping, and going out in the field with the crew to learn estimating. He and I worked side by side and, over the years, he began giving me more responsibilities. My experience in D.C. helped me feel more confident when we would bid large-scale commercial painting projects at universities and hospitals in Denver, which once seemed daunting. Unlike my father, who taught himself how to build a successful business, I was the first person in my family to graduate from college and was fortunate to have an academic background, which helped me in my new role. I took full control of the business at the start of this year.