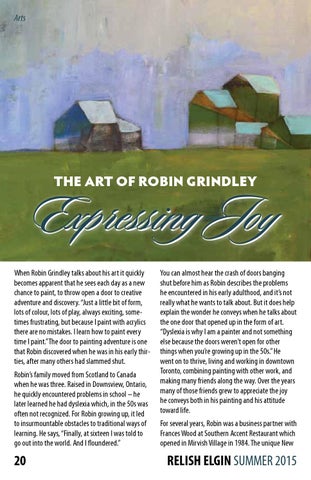 THE ART OF ROBIN GRINDLEY

Expressing Joy When Robin Grindley talks about his art it quickly becomes apparent that he sees each day as a new chance to paint, to throw open a door to creative adventure and discovery. “Just a little bit of form, lots of colour, lots of play, always exciting, sometimes frustrating, but because I paint with acrylics there are no mistakes. I learn how to paint every time I paint.” The door to painting adventure is one that Robin discovered when he was in his early thirties, after many others had slammed shut. Robin’s family moved from Scotland to Canada when he was three. Raised in Downsview, Ontario, he quickly encountered problems in school – he later learned he had dyslexia which, in the 50s was often not recognized. For Robin growing up, it led to insurmountable obstacles to traditional ways of learning. He says, “Finally, at sixteen I was told to go out into the world. And I floundered.”

You can almost hear the crash of doors banging shut before him as Robin describes the problems he encountered in his early adulthood, and it’s not really what he wants to talk about. But it does help explain the wonder he conveys when he talks about the one door that opened up in the form of art. “Dyslexia is why I am a painter and not something else because the doors weren’t open for other things when you’re growing up in the 50s.” He went on to thrive, living and working in downtown Toronto, combining painting with other work, and making many friends along the way. Over the years many of those friends grew to appreciate the joy he conveys both in his painting and his attitude toward life. For several years, Robin was a business partner with Frances Wood at Southern Accent Restaurant which opened in Mirvish Village in 1984. The unique New