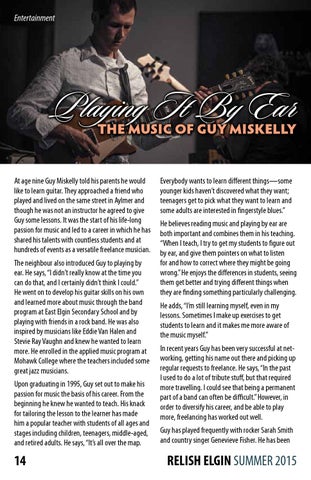 Playing It By Ear THE MUSIC OF GUY MISKELLY

At age nine Guy Miskelly told his parents he would like to learn guitar. They approached a friend who played and lived on the same street in Aylmer and though he was not an instructor he agreed to give Guy some lessons. It was the start of his life-long passion for music and led to a career in which he has shared his talents with countless students and at hundreds of events as a versatile freelance musician. The neighbour also introduced Guy to playing by ear. He says, “I didn’t really know at the time you can do that, and I certainly didn’t think I could.” He went on to develop his guitar skills on his own and learned more about music through the band program at East Elgin Secondary School and by playing with friends in a rock band. He was also inspired by musicians like Eddie Van Halen and Stevie Ray Vaughn and knew he wanted to learn more. He enrolled in the applied music program at Mohawk College where the teachers included some great jazz musicians. Upon graduating in 1995, Guy set out to make his passion for music the basis of his career. From the beginning he knew he wanted to teach. His knack for tailoring the lesson to the learner has made him a popular teacher with students of all ages and stages including children, teenagers, middle-aged, and retired adults. He says, “It’s all over the map.

Everybody wants to learn different things—some younger kids haven’t discovered what they want; teenagers get to pick what they want to learn and some adults are interested in fingerstyle blues.” He believes reading music and playing by ear are both important and combines them in his teaching. “When I teach, I try to get my students to figure out by ear, and give them pointers on what to listen for and how to correct where they might be going wrong.” He enjoys the differences in students, seeing them get better and trying different things when they are finding something particularly challenging. He adds, “I’m still learning myself, even in my lessons. Sometimes I make up exercises to get students to learn and it makes me more aware of the music myself.” In recent years Guy has been very successful at networking, getting his name out there and picking up regular requests to freelance. He says, “In the past I used to do a lot of tribute stuff, but that required more travelling. I could see that being a permanent part of a band can often be difficult.” However, in order to diversify his career, and be able to play more, freelancing has worked out well. Guy has played frequently with rocker Sarah Smith and country singer Genevieve Fisher. He has been