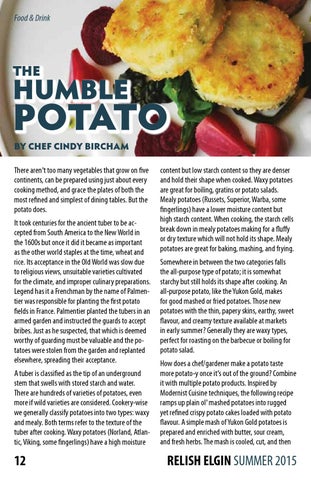 There aren't too many vegetables that grow on five continents, can be prepared using just about every cooking method, and grace the plates of both the most refined and simplest of dining tables. But the potato does. It took centuries for the ancient tuber to be accepted from South America to the New World in the 1600s but once it did it became as important as the other world staples at the time, wheat and rice. Its acceptance in the Old World was slow due to religious views, unsuitable varieties cultivated for the climate, and improper culinary preparations. Legend has it a Frenchman by the name of Palmentier was responsible for planting the first potato fields in France. Palmentier planted the tubers in an armed garden and instructed the guards to accept bribes. Just as he suspected, that which is deemed worthy of guarding must be valuable and the potatoes were stolen from the garden and replanted elsewhere, spreading their acceptance. A tuber is classified as the tip of an underground stem that swells with stored starch and water. There are hundreds of varieties of potatoes, even more if wild varieties are considered. Cookery-wise we generally classify potatoes into two types: waxy and mealy. Both terms refer to the texture of the tuber after cooking. Waxy potatoes (Norland, Atlantic, Viking, some fingerlings) have a high moisture

content but low starch content so they are denser and hold their shape when cooked. Waxy potatoes are great for boiling, gratins or potato salads. Mealy potatoes (Russets, Superior, Warba, some fingerlings) have a lower moisture content but high starch content. When cooking, the starch cells break down in mealy potatoes making for a fluffy or dry texture which will not hold its shape. Mealy potatoes are great for baking, mashing, andÂ frying. Somewhere in between the two categories falls the all-purpose type of potato; it is somewhat starchy but still holds its shape after cooking. An all-purpose potato, like the Yukon Gold, makes for good mashed or fried potatoes. Those new potatoes with the thin, papery skins, earthy, sweet flavour, and creamy texture available at markets in early summer? Generally they are waxy types, perfect for roasting on the barbecue or boiling for potatoÂ salad. How does a chef/gardener make a potato taste more potato-y once it's out of the ground? Combine it with multiple potato products. Inspired by Modernist Cuisine techniques, the following recipe ramps up plain ol' mashed potatoes into rugged yet refined crispy potato cakes loaded with potato flavour. A simple mash of Yukon Gold potatoes is prepared and enriched with butter, sour cream, and fresh herbs. The mash is cooled, cut, and then