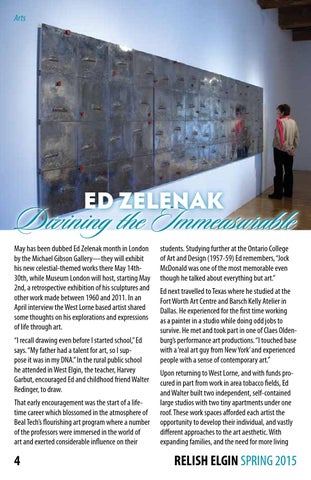 Divining the Immeasurable May has been dubbed Ed Zelenak month in London by the Michael Gibson Gallery—they will exhibit his new celestial-themed works there May 14th30th, while Museum London will host, starting May 2nd, a retrospective exhibition of his sculptures and other work made between 1960 and 2011. In an April interview the West Lorne based artist shared some thoughts on his explorations and expressions of life through art. “I recall drawing even before I started school,” Ed says. “My father had a talent for art, so I suppose it was in my DNA.” In the rural public school he attended in West Elgin, the teacher, Harvey Garbut, encouraged Ed and childhood friend Walter Redinger, to draw. That early encouragement was the start of a lifetime career which blossomed in the atmosphere of Beal Tech’s flourishing art program where a number of the professors were immersed in the world of art and exerted considerable influence on their

students. Studying further at the Ontario College of Art and Design (1957-59) Ed remembers, “Jock McDonald was one of the most memorable even though he talked about everything but art.” Ed next travelled to Texas where he studied at the Fort Worth Art Centre and Barsch Kelly Atelier in Dallas. He experienced for the first time working as a painter in a studio while doing odd jobs to survive. He met and took part in one of Claes Oldenburg’s performance art productions. “I touched base with a ‘real art guy from New York’ and experienced people with a sense of contemporary art.” Upon returning to West Lorne, and with funds procured in part from work in area tobacco fields, Ed and Walter built two independent, self-contained large studios with two tiny apartments under one roof. These work spaces afforded each artist the opportunity to develop their individual, and vastly different approaches to the art aesthetic. With expanding families, and the need for more living