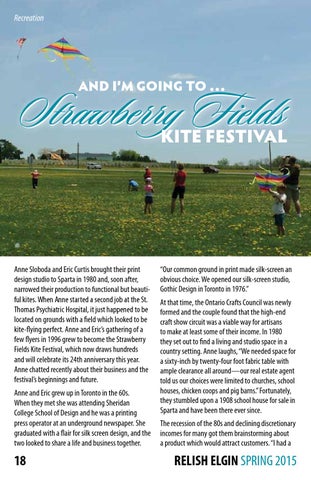 Anne Sloboda and Eric Curtis brought their print design studio to Sparta in 1980 and, soon after, narrowed their production to functional but beautiful kites. When Anne started a second job at the St. Thomas Psychiatric Hospital, it just happened to be located on grounds with a field which looked to be kite-flying perfect. Anne and Eric’s gathering of a few flyers in 1996 grew to become the Strawberry Fields Kite Festival, which now draws hundreds and will celebrate its 24th anniversary this year. Anne chatted recently about their business and the festival’s beginnings and future. Anne and Eric grew up in Toronto in the 60s. When they met she was attending Sheridan College School of Design and he was a printing press operator at an underground newspaper. She graduated with a flair for silk screen design, and the two looked to share a life and business together.

“Our common ground in print made silk-screen an obvious choice. We opened our silk-screen studio, Gothic Design in Toronto in 1976.” At that time, the Ontario Crafts Council was newly formed and the couple found that the high-end craft show circuit was a viable way for artisans to make at least some of their income. In 1980 they set out to find a living and studio space in a country setting. Anne laughs, “We needed space for a sixty-inch by twenty-four foot fabric table with ample clearance all around—our real estate agent told us our choices were limited to churches, school houses, chicken coops and pig barns.” Fortunately, they stumbled upon a 1908 school house for sale in Sparta and have been there ever since. The recession of the 80s and declining discretionary incomes for many got them brainstorming about a product which would attract customers. “I had a