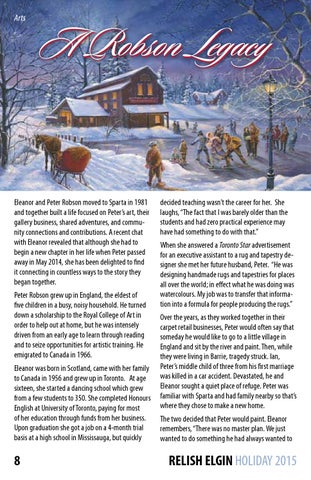 Eleanor and Peter Robson moved to Sparta in 1981 and together built a life focused on Peter’s art, their gallery business, shared adventures, and community connections and contributions. A recent chat with Eleanor revealed that although she had to begin a new chapter in her life when Peter passed away in May 2014, she has been delighted to find it connecting in countless ways to the story they began together. Peter Robson grew up in England, the eldest of five children in a busy, noisy household. He turned down a scholarship to the Royal College of Art in order to help out at home, but he was intensely driven from an early age to learn through reading and to seize opportunities for artistic training. He emigrated to Canada in 1966. Eleanor was born in Scotland, came with her family to Canada in 1956 and grew up in Toronto. At age sixteen, she started a dancing school which grew from a few students to 350. She completed Honours English at University of Toronto, paying for most of her education through funds from her business. Upon graduation she got a job on a 4-month trial basis at a high school in Mississauga, but quickly

decided teaching wasn’t the career for her. She laughs, “The fact that I was barely older than the students and had zero practical experience may have had something to do with that.” When she answered a Toronto Star advertisement for an executive assistant to a rug and tapestry designer she met her future husband, Peter. “He was designing handmade rugs and tapestries for places all over the world; in effect what he was doing was watercolours. My job was to transfer that information into a formula for people producing the rugs.” Over the years, as they worked together in their carpet retail businesses, Peter would often say that someday he would like to go to a little village in England and sit by the river and paint. Then, while they were living in Barrie, tragedy struck. Ian, Peter’s middle child of three from his first marriage was killed in a car accident. Devastated, he and Eleanor sought a quiet place of refuge. Peter was familiar with Sparta and had family nearby so that’s where they chose to make a new home. The two decided that Peter would paint. Eleanor remembers, “There was no master plan. We just wanted to do something he had always wanted to