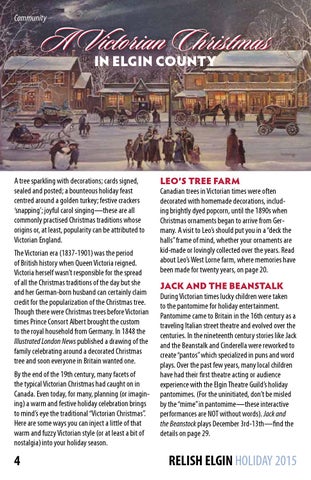 A Victorian Christmas IN ELGIN COUNTY

A tree sparkling with decorations; cards signed, sealed and posted; a bounteous holiday feast centred around a golden turkey; festive crackers ‘snapping’; joyful carol singing—these are all commonly practised Christmas traditions whose origins or, at least, popularity can be attributed to Victorian England. The Victorian era (1837-1901) was the period of British history when Queen Victoria reigned. Victoria herself wasn’t responsible for the spread of all the Christmas traditions of the day but she and her German-born husband can certainly claim credit for the popularization of the Christmas tree. Though there were Christmas trees before Victorian times Prince Consort Albert brought the custom to the royal household from Germany. In 1848 the Illustrated London News published a drawing of the family celebrating around a decorated Christmas tree and soon everyone in Britain wanted one. By the end of the 19th century, many facets of the typical Victorian Christmas had caught on in Canada. Even today, for many, planning (or imagining) a warm and festive holiday celebration brings to mind’s eye the traditional “Victorian Christmas”. Here are some ways you can inject a little of that warm and fuzzy Victorian style (or at least a bit of nostalgia) into your holiday season.

Canadian trees in Victorian times were often decorated with homemade decorations, including brightly dyed popcorn, until the 1890s when Christmas ornaments began to arrive from Germany. A visit to Leo’s should put you in a “deck the halls” frame of mind, whether your ornaments are kid-made or lovingly collected over the years. Read about Leo’s West Lorne farm, where memories have been made for twenty years, on page 20.

Jack and the Beanstalk

During Victorian times lucky children were taken to the pantomime for holiday entertainment. Pantomime came to Britain in the 16th century as a traveling Italian street theatre and evolved over the centuries. In the nineteenth century stories like Jack and the Beanstalk and Cinderella were reworked to create “pantos” which specialized in puns and word plays. Over the past few years, many local children have had their first theatre acting or audience experience with the Elgin Theatre Guild’s holiday pantomimes. (For the uninitiated, don’t be misled by the “mime” in pantomime—these interactive performances are NOT without words). Jack and the Beanstock plays December 3rd-13th—find the details on page 29.