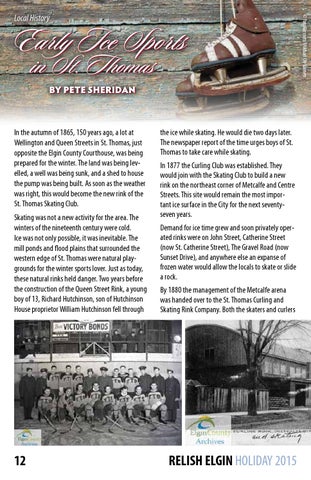 In the autumn of 1865, 150 years ago, a lot at Wellington and Queen Streets in St. Thomas, just opposite the Elgin County Courthouse, was being prepared for the winter. The land was being levelled, a well was being sunk, and a shed to house the pump was being built. As soon as the weather was right, this would become the new rink of the St. Thomas Skating Club. Skating was not a new activity for the area. The winters of the nineteenth century were cold. Ice was not only possible, it was inevitable. The mill ponds and flood plains that surrounded the western edge of St. Thomas were natural playgrounds for the winter sports lover. Just as today, these natural rinks held danger. Two years before the construction of the Queen Street Rink, a young boy of 13, Richard Hutchinson, son of Hutchinson House proprietor William Hutchinson fell through

the ice while skating. He would die two days later. The newspaper report of the time urges boys of St. Thomas to take care while skating. In 1877 the Curling Club was established. They would join with the Skating Club to build a new rink on the northeast corner of Metcalfe and Centre Streets. This site would remain the most important ice surface in the City for the next seventysevenÂ years. Demand for ice time grew and soon privately operated rinks were on John Street, Catherine Street (now St. Catherine Street), The Gravel Road (now Sunset Drive), and anywhere else an expanse of frozen water would allow the locals to skate or slide a rock. By 1880 the management of the Metcalfe arena was handed over to the St. Thomas Curling and Skating Rink Company. Both the skaters and curlers