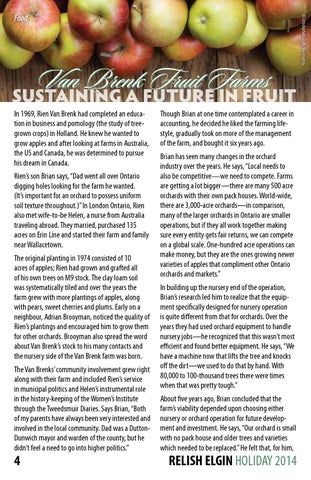 Sustaining a Future In Fruit In 1969, Rien Van Brenk had completed an education in business and pomology (the study of treegrown crops) in Holland. He knew he wanted to grow apples and after looking at farms in Australia, the US and Canada, he was determined to pursue his dream in Canada. Rien’s son Brian says, “Dad went all over Ontario digging holes looking for the farm he wanted. (It’s important for an orchard to possess uniform soil texture throughout.)” In London Ontario, Rien also met wife-to-be Helen, a nurse from Australia traveling abroad. They married, purchased 135 acres on Erin Line and started their farm and family near Wallacetown. The original planting in 1974 consisted of 10 acres of apples; Rien had grown and grafted all of his own trees on M9 stock. The clay loam soil was systematically tiled and over the years the farm grew with more plantings of apples, along with pears, sweet cherries and plums. Early on a neighbour, Adrian Brooyman, noticed the quality of Rien’s plantings and encouraged him to grow them for other orchards. Brooyman also spread the word about Van Brenk’s stock to his many contacts and the nursery side of the Van Brenk farm was born. The Van Brenks’ community involvement grew right along with their farm and included Rien’s service in municipal politics and Helen’s instrumental role in the history-keeping of the Women’s Institute through the Tweedsmuir Diaries. Says Brian, “Both of my parents have always been very interested and involved in the local community. Dad was a DuttonDunwich mayor and warden of the county, but he didn’t feel a need to go into higher politics.”

Though Brian at one time contemplated a career in accounting, he decided he liked the farming lifestyle, gradually took on more of the management of the farm, and bought it six years ago. Brian has seen many changes in the orchard industry over the years. He says, “Local needs to also be competitive—we need to compete. Farms are getting a lot bigger—there are many 500 acre orchards with their own pack houses. World-wide, there are 3,000-acre orchards—in comparison, many of the larger orchards in Ontario are smaller operations, but if they all work together making sure every entity gets fair returns, we can compete on a global scale. One-hundred acre operations can make money, but they are the ones growing newer varieties of apples that compliment other Ontario orchards and markets.” In building up the nursery end of the operation, Brian’s research led him to realize that the equipment specifically designed for nursery operation is quite different from that for orchards. Over the years they had used orchard equipment to handle nursery jobs—he recognized that this wasn’t most efficient and found better equipment. He says, “We have a machine now that lifts the tree and knocks off the dirt—we used to do that by hand. With 80,000 to 100-thousand trees there were times when that was pretty tough.” About five years ago, Brian concluded that the farm’s viability depended upon choosing either nursery or orchard operation for future development and investment. He says, “Our orchard is small with no pack house and older trees and varieties which needed to be replaced.” He felt that, for him,