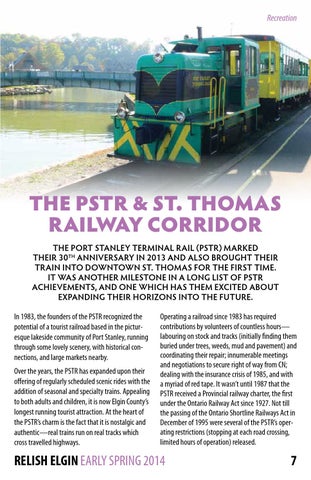 The Pstr & St. Thomas RailWay Corridor The Port Stanley Terminal Rail (PSTR) marked their 30th anniversary in 2013 and also brought their train into downtown St. Thomas for the first time. It was another milestone in a long list of PSTR achievements, and one which has them excited about expanding their horizons into the future. In 1983, the founders of the PSTR recognized the potential of a tourist railroad based in the picturesque lakeside community of Port Stanley, running through some lovely scenery, with historical connections, and large markets nearby. Over the years, the PSTR has expanded upon their offering of regularly scheduled scenic rides with the addition of seasonal and specialty trains. Appealing to both adults and children, it is now Elgin County’s longest running tourist attraction. At the heart of the PSTR’s charm is the fact that it is nostalgic and authentic—real trains run on real tracks which cross travelled highways.

Operating a railroad since 1983 has required contributions by volunteers of countless hours— labouring on stock and tracks (initially finding them buried under trees, weeds, mud and pavement) and coordinating their repair; innumerable meetings and negotiations to secure right of way from CN; dealing with the insurance crisis of 1985, and with a myriad of red tape. It wasn’t until 1987 that the PSTR received a Provincial railway charter, the first under the Ontario Railway Act since 1927. Not till the passing of the Ontario Shortline Railways Act in December of 1995 were several of the PSTR’s operating restrictions (stopping at each road crossing, limited hours of operation) released.