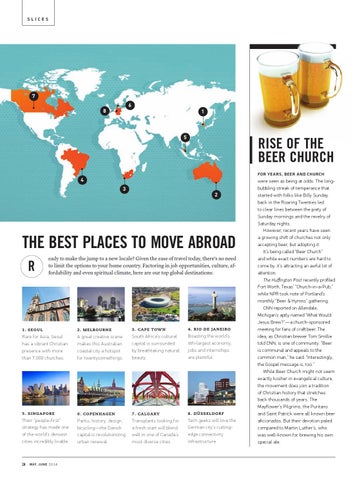 RISE OF THE BEER CHURCH FOR YEARS, BEER AND CHURCH

eady to make the jump to a new locale? Given the ease of travel today, there’s no need to limit the options to your home country. Factoring in job opportunities, culture, affordability and even spiritual climate, here are our top global destinations:

Rare for Asia, Seoul has a vibrant Christian presence with more than 7,000 churches.

A great creative scene makes this Australian coastal city a hotspot for twentysomethings.

Boasting the world’s 6th-largest economy, jobs and internships are plentiful.

Their “people-first” strategy has made one of the world’s densest cities incredibly livable.

Transplants looking for a fresh start will blend well in one of Canada’s most diverse cities.

were seen as being at odds. The longbubbling streak of temperance that started with folks like Billy Sunday back in the Roaring Twenties led to clear lines between the piety of Sunday mornings and the revelry of Saturday nights. However, recent years have seen a growing shift of churches not only accepting beer, but adopting it. It’s being called “Beer Church” and while exact numbers are hard to come by, it’s attracting an awful lot of attention. The Huffington Post recently profiled Fort Worth, Texas’ “Church-in-a-Pub,” while NPR took note of Portland’s monthly “Beer &amp; Hymns” gathering. CNN reported on Allendale, Michigan’s aptly named “What Would Jesus Brew?”—a church-sponsored meeting for fans of craft beer. The idea, as Christian brewer Tom Smillie told CNN, is one of community. “Beer is communal and appeals to the common man,” he said. “Interestingly, the Gospel message is, too.” While Beer Church might not seem exactly kosher in evangelical culture, the movement does join a tradition of Christian history that stretches back thousands of years. The Mayflower’s Pilgrims, the Puritans and Saint Patrick were all known beer aficionados. But their devotion paled compared to Martin Luther’s, who was well-known for brewing his own special ale. 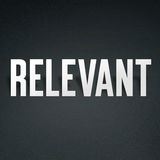