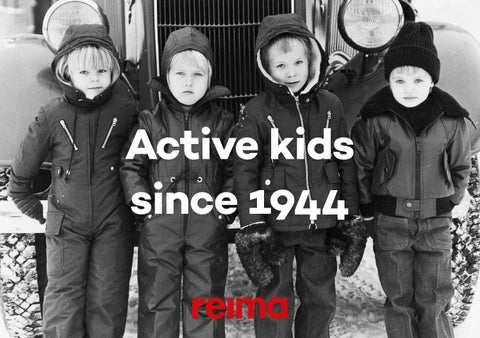 1944 We started by recycling Reima’s roots are in World War II. Pallo-Paita Oy, which manufactured garments for the army, moved temporarily from Helsinki to Kankaanpää for safety during air attacks in 1939. After the war, the owners wanted to utilize the capacity and trained local workers that remained in Kankaanpää, so they founded Kankama Oy. In the early post-war years, there was shortage of raw materials. The new company set out to manufacture its first products, women’s work wear, out of old army snowsuits.

1950s Durable materials for outdoors The company grew strongly and changed its name to Reima-Pukine, after the name of a popular shirt in Pallo-Paita’s collections.The north spar buoy (“reimari” in Finnish) became the company symbol, reflecting the moving of production to the north. Since no sufficiently durable material for children’s wear was available, Reima started to develop one together with Littoisten Verkatehdas. Reima was among the first Finnish companies to advertise on TV at the end of the decade. In the memorable ad, the factory managers’ own sons spun a grindstone against pant bottoms to prove their durability.

1960s Learning to export During the sixties Reima finally opened export channels, succeeding especially well in the east. Reima opened up satellite factories in order to secure production capacity. At the end of the decade Reima launched Enstex® material, a revolutionary combination of durability and water repellence. Product development followed fashion trends, with known designers such as Reino Koski and Kristina Jakobsson-Kärki working for Reima. In Finland, marketing hired popular artists to advertise Reima. Also the managing director’s Rolls Royce cruised about, taking children on for a ”Reima ride”.

1980s Relying on the Soviet Everything new is often trendy, so Reima marketing in the 80s featured the brand new Helsinki metro! Reima also introduced its Reima Club: an informative, entertaining brochure that contained some highlights of the collection was sent to consumersâ&amp;#x20AC;&amp;#x2122; homes twice a year. During the 80s, Reima needed to clear its huge stocks and close down several satellites. This streamlining succeeded mainly because of sales to the Soviet Union. Although the amount of workers was halved, turnover doubled.

1990s Innovation brings growth As sales to the east ended with the breakdown of the Soviet Union, many Finnish textile firms went bankrupt. Reima joined forces with children’s wear brand Tutta® to form Reima-Tutta Oy, which also acquired the Lassie® brand. To stay competent, the new company started moving its production to China. Reima continued product development in order to make breathable, wind- and waterproof clothing affordable for families. The resulting Reimatec® collection was launched loudly and proudly in Finland and soon in all major export countries. The share of export in Reima quickly rose up to ~70 %.

2010s Activating kids globally Reima leads the functional kidsâ&amp;#x20AC;&amp;#x2122; wear market and strengthens its digital core: the first Reima online store opens in Finland in 2011 and soon expands to other countries. Reima grows its franchise chain on the Eastern markets while also finding new retailers in the West. Reima also opens offline stores in several markets. In 2016, Reima launches innovative wearable tech for kids. The ReimaGOÂŽ concept, developed together with Suunto, consists of a kidsâ&amp;#x20AC;&amp;#x2122; activity sensor, clothing and app that encourages kids to be active. Reima also buys the company Finnish Baby Box to support its international expansion and offering of digital services to consumers.

Reima is all about joy of movement that lasts over time.