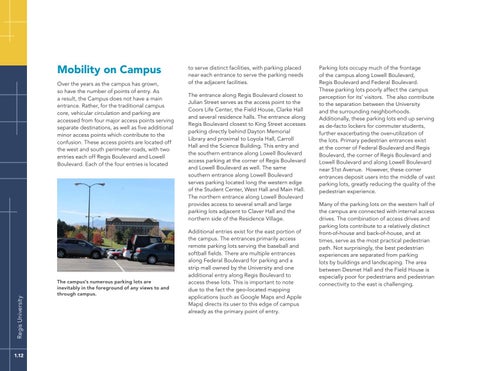 Over the years as the campus has grown, so have the number of points of entry. As a result, the Campus does not have a main entrance. Rather, for the traditional campus core, vehicular circulation and parking are accessed from four major access points serving separate destinations, as well as five additional minor access points which contribute to the confusion. These access points are located off the west and south perimeter roads, with two entries each off Regis Boulevard and Lowell Boulevard. Each of the four entries is located

The campusâ&amp;#x20AC;&amp;#x2122;s numerous parking lots are inevitably in the foreground of any views to and through campus.

A Master Plan creates a long term vision of how to develop the physical campus, such as the location and uses of existing and future buildings, landscape elements, and transportation solutions.