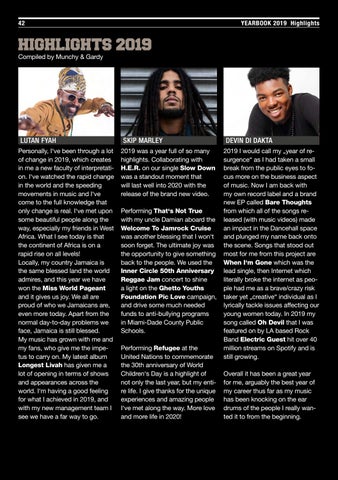 LUTAN FYAH Personally, I‘ve been through a lot of change in 2019, which creates in me a new faculty of interpretation. I‘ve watched the rapid change in the world and the speeding movements in music and I‘ve come to the full knowledge that only change is real. I‘ve met upon some beautiful people along the way, especially my friends in West Africa. What I see today is that the continent of Africa is on a rapid rise on all levels! Locally, my country Jamaica is the same blessed land the world admires, and this year we have won the Miss World Pageant and it gives us joy. We all are proud of who we Jamaicans are, even more today. Apart from the normal day-to-day problems we face, Jamaica is still blessed. My music has grown with me and my fans, who give me the impetus to carry on. My latest album Longest Livah has given me a lot of opening in terms of shows and appearances across the world. I‘m having a good feeling for what I achieved in 2019, and with my new management team I see we have a far way to go.

SKIP MARLEY 2019 was a year full of so many highlights. Collaborating with H.E.R. on our single Slow Down was a standout moment that will last well into 2020 with the release of the brand new video. Performing That‘s Not True with my uncle Damian aboard the Welcome To Jamrock Cruise was another blessing that I won‘t soon forget. The ultimate joy was the opportunity to give something back to the people. We used the Inner Circle 50th Anniversary Reggae Jam concert to shine a light on the Ghetto Youths Foundation Pic Love campaign, and drive some much needed funds to anti-bullying programs in Miami-Dade County Public Schools. Performing Refugee at the United Nations to commemorate the 30th anniversary of World Children‘s Day is a highlight of not only the last year, but my entire life. I give thanks for the unique experiences and amazing people I‘ve met along the way. More love and more life in 2020!

DEVIN DI DAKTA 2019 I would call my „year of resurgence“ as I had taken a small break from the public eyes to focus more on the business aspect of music. Now I am back with my own record label and a brand new EP called Bare Thoughts from which all of the songs released (with music videos) made an impact in the Dancehall space and plunged my name back onto the scene. Songs that stood out most for me from this project are When I‘m Gone which was the lead single, then Internet which literally broke the internet as people had me as a brave/crazy risk taker yet „creative“ individual as I lyrically tackle issues affecting our young women today. In 2019 my song called Oh Devil that I was featured on by LA based Rock Band Electric Guest hit over 40 million streams on Spotify and is still growing. Overall it has been a great year for me, arguably the best year of my career thus far as my music has been knocking on the ear drums of the people I really wanted it to from the beginning. 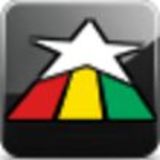