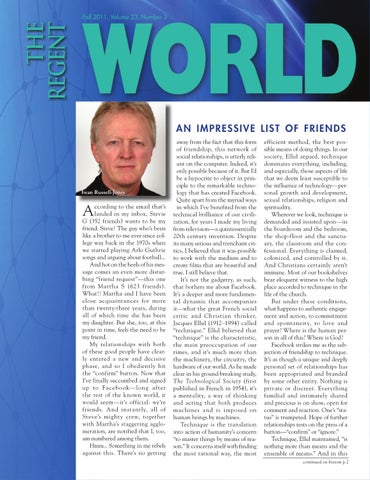 ccording to the email that’s landed in my inbox, Stevie G (352 friends) wants to be my friend. Steve! The guy who’s been like a brother to me ever since college way back in the 1970s when we started playing Arlo Guthrie songs and arguing about football... And hot on the heels of his message comes an even more disturbing “friend request”—this one from Martha S (623 friends). What!! Martha and I have been close acquaintances for more than twenty-three years, during all of which time she has been my daughter. But she, too, at this point in time, feels the need to be my friend. My relationships with both of these good people have clearly entered a new and decisive phase, and so I obediently hit the “confirm” button. Now that I’ve finally succumbed and signed up to Facebook—long a f ter the rest of the known world, it would seem—it’s official: we’re friends. And instantly, all of Steve’s mighty crew, together with Martha’s staggering agglomeration, are notified that I, too, am numbered among them. Hmm... Something in me rebels against this. There’s no getting

away from the fact that this form of friendship, this network of social relationships, is utterly reliant on the computer. Indeed, it’s only possible because of it. But I’d be a hypocrite to object in principle to the remarkable technology that has created Facebook. Quite apart from the myriad ways in which I’ve benefited from the technical brilliance of our civilization, for years I made my living from television—a quintessentially 20th century invention. Despite its many serious and trenchant critics, I believed that it was possible to work with the medium and to create films that are beautiful and true. I still believe that. It’s not the gadgetry, as such, that bothers me about Facebook. It’s a deeper and more fundamental dynamic that accompanies it—what the great French social critic and Christian thinker, Jacques Ellul (1912–1994) called “technique.” Ellul believed that “technique” is the characteristic, the main preoccupation of our times, and it’s much more than the machinery, the circuitry, the hardware of our world. As he made clear in his ground-breaking study, The Technological Society (first published in French in 1954), it’s a mentality, a way of thinking and acting that both produces machines and is imposed on human beings by machines. Technique is the translation into action of humanity’s concern “to master things by means of reason.” It concerns itself with finding the most rational way, the most

efficient method, the best possible means of doing things. In our society, Ellul argued, technique dominates everything, including, and especially, those aspects of life that we deem least susceptible to the influence of technology—personal growth and development, sexual relationships, religion and spirituality. Wherever we look, technique is demanded and insisted upon—in the boardroom and the bedroom, the shop-floor and the sanctuary, the classroom and the confessional. Everything is claimed, colonized, and controlled by it. And Christians certainly aren’t immune. Most of our bookshelves bear eloquent witness to the high place accorded to technique in the life of the church. But under these conditions, what happens to authentic engagement and action, to commitment and spontaneity, to love and prayer? Where is the human person in all of this? Where is God? Facebook strikes me as the subjection of friendship to technique. It’s as though a unique and deeply personal set of relationships has been appropriated and branded by some other entity. Nothing is private or discreet. Everything familial and intimately shared and precious is on show, open for comment and reaction. One’s “status” is trumpeted. Hope of further relationships rests on the press of a button—“confirm” or “ignore.” Technique, Ellul maintained, “is nothing more than means and the ensemble of means.” And in this continued on bottom p.2

Regent World is the free publication of Regent College that focuses on College news, students and upcoming events. This page features articles about social media 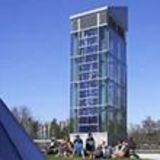