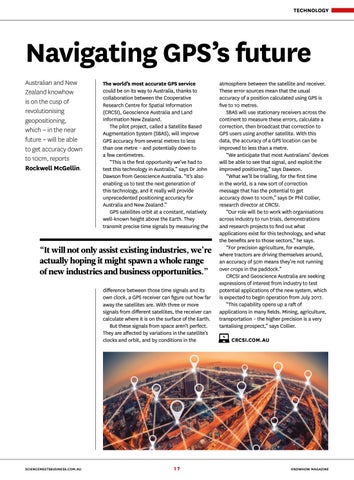 Navigating GPS’s future Australian and New Zealand knowhow is on the cusp of revolutionising geopositioning, which – in the near future – will be able to get accuracy down to 10cm, reports Rockwell McGellin.

The world’s most accurate GPS service could be on its way to Australia, thanks to collaboration between the Cooperative Research Centre for Spatial Information (CRCSI), Geoscience Australia and Land Information New Zealand. The pilot project, called a Satellite Based Augmentation System (SBAS), will improve GPS accuracy from several metres to less than one metre – and potentially down to a few centimetres. “This is the first opportunity we’ve had to test this technology in Australia,” says Dr John Dawson from Geoscience Australia. “It’s also enabling us to test the next generation of this technology, and it really will provide unprecedented positioning accuracy for Australia and New Zealand.” GPS satellites orbit at a constant, relatively well-known height above the Earth. They transmit precise time signals by measuring the

“It will not only assist existing industries, we’re actually hoping it might spawn a whole range of new industries and business opportunities.” difference between those time signals and its own clock, a GPS receiver can figure out how far away the satellites are. With three or more signals from different satellites, the receiver can calculate where it is on the surface of the Earth. But these signals from space aren’t perfect. They are affected by variations in the satellite’s clocks and orbit, and by conditions in the

atmosphere between the satellite and receiver. These error sources mean that the usual accuracy of a position calculated using GPS is five to 10 metres. SBAS will use stationary receivers across the continent to measure these errors, calculate a correction, then broadcast that correction to GPS users using another satellite. With this data, the accuracy of a GPS location can be improved to less than a metre. “We anticipate that most Australians’ devices will be able to see that signal, and exploit the improved positioning,” says Dawson. “What we’ll be trialling, for the first time in the world, is a new sort of correction message that has the potential to get accuracy down to 10cm,” says Dr Phil Collier, research director at CRCSI. “Our role will be to work with organisations across industry to run trials, demonstrations and research projects to find out what applications exist for this technology, and what the benefits are to those sectors,” he says. “For precision agriculture, for example, where tractors are driving themselves around, an accuracy of 5cm means they’re not running over crops in the paddock.” CRCSI and Geoscience Australia are seeking expressions of interest from industry to test potential applications of the new system, which is expected to begin operation from July 2017. “This capability opens up a raft of applications in many fields. Mining, agriculture, transportation – the higher precision is a very tantalising prospect,” says Collier.

Research commercialisation, science start-ups and genuine, productive collaboration nationally and overseas will be the cornerstones of Australia’s innovation future. In this special edition of KnowHow, discover Australia’s top CRC achievements, plus five fast-growing research areas to watch, from scramjets to digital cash and AgTech trailblazers. This issue of KnowHow also takes a look at best practice in engaging with Indigenous researchers, successful partnerships between research and industry, and how to exit R&D programs with maximum legacy. Connect with the world’s top minds as they tell us their vision of the future of science research and how linking business with science will play out in the economy and society today and tomorrow. Order the magazine at sciencemeetsbusiness.com.au/order 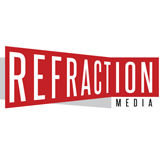