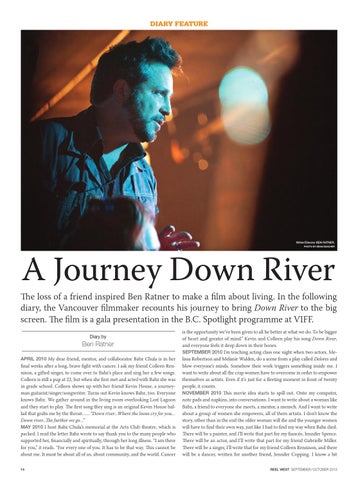 A Journey Down River

The loss of a friend inspired Ben Ratner to make a film about living. In the following diary, the Vancouver filmmaker recounts his journey to bring Down River to the big screen. The film is a gala presentation in the B.C. Spotlight programme at VIFF. Diary by

Ben Ratner April 2010 My dear friend, mentor, and collaborator Babz Chula is in her final weeks after a long, brave fight with cancer. I ask my friend Colleen Rennison, a gifted singer, to come over to Babz’s place and sing her a few songs. Colleen is still a pup at 22, but when she first met and acted with Babz she was in grade school. Colleen shows up with her friend Kevin House, a journeyman guitarist/singer/songwriter. Turns out Kevin knows Babz, too. Everyone knows Babz. We gather around in the living room overlooking Lost Lagoon and they start to play. The first song they sing is an original Kevin House ballad that grabs me by the throat……“Down river…Where the loons cry for you… Down river...The further we go…” May 2010 I host Babz Chula’s memorial at the Arts Club theatre, which is packed. I read the letter Babz wrote to say thank you to the many people who supported her, financially and spiritually, through her long illness. “I am there for you,” it reads. “For every one of you. It has to be that way. This cannot be about me. It must be about all of us, about community, and the world. Cancer 14

is the opportunity we’ve been given to all be better at what we do. To be bigger of heart and greater of mind.” Kevin and Colleen play his song Down River, and everyone feels it deep down in their bones. September 2010 I’m teaching acting class one night when two actors, Melissa Robertson and Melanie Walden, do a scene from a play called Delores and blow everyone’s minds. Somehow their work triggers something inside me. I want to write about all the crap women have to overcome in order to empower themselves as artists. Even if it’s just for a fleeting moment in front of twenty people, it counts. November 2010 This movie idea starts to spill out. Onto my computer, note pads and napkins, into conversations. I want to write about a woman like Babz, a friend to everyone she meets, a mentor, a mensch. And I want to write about a group of women she empowers, all of them artists. I don’t know the story, other than in the end the older woman will die and the younger women will have to find their own way, just like I had to find my way when Babz died. There will be a painter, and I’ll write that part for my fiancée, Jennifer Spence. There will be an actor, and I’ll write that part for my friend Gabrielle Miller. There will be a singer, I’ll write that for my friend Colleen Rennison, and there will be a dancer, written for another friend, Jennifer Copping. I know a bit Reel West September / OCtober 2013

Trade Magazine for the Digital, Film and Television Production Industry