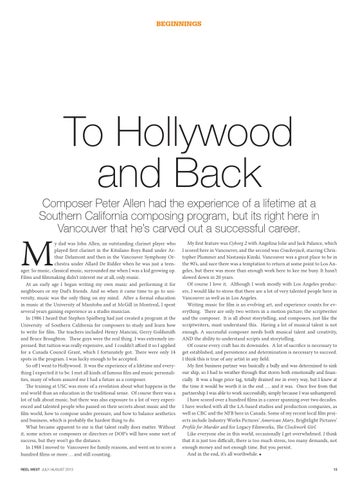 To Hollywood and Back Composer Peter Allen had the experience of a lifetime at a Southern California composing program, but its right here in Vancouver that he’s carved out a successful career.

y dad was John Allen, an outstanding clarinet player who played first clarinet in the Kitsilano Boys Band under Arthur Delamont and then in the Vancouver Symphony Orchestra under Allard De Ridder when he was just a teenager. So music, classical music, surrounded me when I was a kid growing up. Films and filmmaking didn’t interest me at all, only music. At an early age I began writing my own music and performing it for neighbours or my Dad’s friends. And so when it came time to go to university, music was the only thing on my mind. After a formal education in music at the University of Manitoba and at McGill in Montreal, I spent several years gaining experience as a studio musician. In 1986 I heard that Stephen Spielberg had just created a program at the University of Southern California for composers to study and learn how to write for film. The teachers included Henry Mancini, Gerry Goldsmith and Bruce Broughton. These guys were the real thing. I was extremely impressed. But tuition was really expensive, and I couldn’t afford it so I applied for a Canada Council Grant, which I fortunately got. There were only 14 spots in the program. I was lucky enough to be accepted. So off I went to Hollywood. It was the experience of a lifetime and everything I expected it to be. I met all kinds of famous film and music personalities, many of whom assured me I had a future as a composer. The training at USC was more of a revelation about what happens in the real world than an education in the traditional sense. Of course there was a lot of talk about music, but there was also exposure to a lot of very experienced and talented people who passed on their secrets about music and the film world, how to compose under pressure, and how to balance aesthetics and business, which is probably the hardest thing to do. What became apparent to me is that talent really does matter. Without it, some actors or composers or directors or DOP’s will have some sort of success, but they won’t go the distance. In 1988 I moved to Vancouver for family reasons, and went on to score a hundred films or more … and still counting. Reel West July / August 2013

My first feature was Cyborg 2 with Angelina Jolie and Jack Palance, which I scored here in Vancouver, and the second was Crackerjack, starring Christopher Plummer and Nastassja Kinski. Vancouver was a great place to be in the 90’s, and sure there was a temptation to return at some point to Los Angeles, but there was more than enough work here to kee me busy. It hasn’t slowed down in 20 years. Of course I love it. Although I work mostly with Los Angeles producers, I would like to stress that there are a lot of very talented people here in Vancouver as well as in Los Angeles. Writing music for film is an evolving art, and experience counts for everything. There are only two writers in a motion picture; the scriptwriter and the composer. It is all about storytelling, and composers, just like the scriptwriters, must understand this. Having a lot of musical talent is not enough. A successful composer needs both musical talent and creativity, AND the ability to understand scripts and storytelling. Of course every craft has its downsides. A lot of sacrifice is necessary to get established, and persistence and determination is necessary to succeed. I think this is true of any artist in any field. My first business partner was basically a bully and was determined to sink our ship, so I had to weather through that storm both emotionally and financially. It was a huge price tag, totally drained me in every way, but I knew at the time it would be worth it in the end …. and it was. Once free from that partnership I was able to work successfully, simply because I was unhampered. I have scored over a hundred films in a career spanning over two decades. I have worked with all the LA-based studios and production companies, as well as CBC and the NFB here in Canada. Some of my recent local film projects include Industry Works Pictures’ American Mary, Brightlight Pictures’ Profile for Murder and for Legacy Filmworks, The Clockwork Girl. Like everyone else in this world, occasionally I get overwhelmed. I think that it is just too difficult, there is too much stress, too many demands, not enough money and not enough time. But you persist. And in the end, it’s all worthwhile. n 13

Trade Magazine for the Digital, Film and Television Production Industry