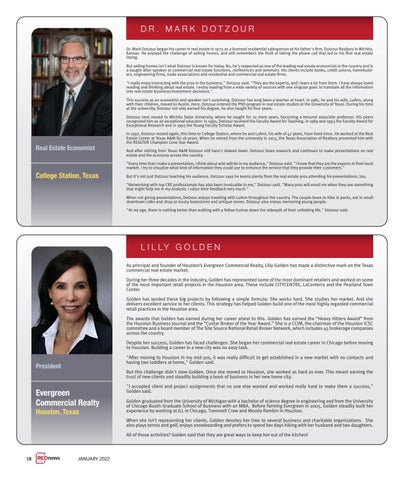 DR. MARK DOTZOUR Dr. Mark Dotzour began his career in real estate in 1975 as a licensed residential salesperson at his father&#39;s firm, Dotzour Realtors in Wichita, Kansas. He enjoyed the challenge of selling homes, and still remembers the thrill of taking the phone call that led to his first real estate listing. But selling homes isn&#39;t what Dotzour is known for today. No, he&#39;s respected as one of the leading real estate economists in the country and is a sought-after speaker at commercial real estate functions, conferences and seminars. His clients include banks, credit unions, homebuilders, engineering firms, trade associations and residential and commercial real estate firms. &quot;I really enjoy interacting with the pros in the business,&quot; Dotzour said. &quot;They are the experts, and I learn a lot from them. I have always loved reading and thinking about real estate. I enjoy reading from a wide variety of sources with one singular goal: to translate all the information into real estate business/investment decisions.&quot; This success as an economist and speaker isn&#39;t surprising. Dotzour has long been a teacher at heart. In 1981, he and his wife, LuAnn, along with their children, moved to Austin. Here, Dotzour entered the PhD program in real estate studies at the University of Texas. During his time at the university, Dotzour not only earned his degree, he also taught for four years. Dotzour next moved to Wichita State University, where he taught for 10 more years, becoming a tenured associate professor. His peers recognized him as an exceptional educator: In 1990, Dotzour received the Faculty Award for Teaching, in 1989 and 1993 the Faculty Award for Exceptional Research and in 1993 the Young Faculty Scholar Award.

In 1997, Dotzour moved again, this time to College Station, where he and LuAnn, his wife of 47 years, have lived since. He worked at the Real Estate Center at Texas A&amp;M for 18 years. When he retired from the university in 2015, the Texas Association of Realtors presented him with the REALTOR Champion Lone Star Award. And after retiring from Texas A&amp;M Dotzour still hasn&#39;t slowed down. Dotzour loves research and continues to make presentations on real estate and the economy across the country. &quot;Every time that I make a presentation, I think about who will be in my audience,&quot; Dotzour said. &quot;I know that they are the experts in their local market. I try to visualize what kind of information they could use to enhance the service that they provide their customers.&quot; But it&#39;s not just Dotzour teaching his audience. Dotzour says he learns plenty from the real estate pros attending his presentations, too. &quot;Networking with top CRE professionals has also been invaluable to me,&quot; Dotzour said. &quot;Many pros will email me when they see something that might help me in my analysis. I value their feedback very much.&quot; When not giving presentations, Dotzour enjoys traveling with LuAnn throughout the country. The couple loves to hike in parks, eat in small downtown cafes and shop at musty bookstores and antique stores. Dotzour also enjoys mentoring young people. &quot;At my age, there is nothing better than walking with a fellow human down the sidewalk of their unfolding life,&quot; Dotzour said.

L I L LY G O L D E N As principal and founder of Houston’s Evergreen Commercial Realty, Lilly Golden has made a distinctive mark on the Texas commercial real estate market. During her three decades in the industry, Golden has represented some of the most dominant retailers and worked on some of the most important retail projects in the Houston area. These include CITYCENTRE, LaCenterra and the Pearland Town Center. Golden has landed these big projects by following a simple formula: She works hard. She studies her market. And she delivers excellent service to her clients. This strategy has helped Golden build one of the most highly regarded commercial retail practices in the Houston area. The awards that Golden has earned during her career attest to this. Golden has earned the “Heavy Hitters Award” from the Houston Business Journal and the “Costar Broker of the Year Award.” She is a CCIM, the chairman of the Houston ICSC committee and a board member of The Site Source National Retail Broker Network, which includes 45 brokerage companies across the country. Despite her success, Golden has faced challenges. She began her commercial real estate career in Chicago before moving to Houston. Building a career in a new city was no easy task. &quot;After moving to Houston in my mid-30s, it was really difficult to get established in a new market with no contacts and having two toddlers at home,&quot; Golden said.

But this challenge didn&#39;t slow Golden. Once she moved to Houston, she worked as hard as ever. This meant earning the trust of new clients and steadily building a book of business in her new home city.

&quot;I accepted client and project assignments that no one else wanted and worked really hard to make them a success,&quot; Golden said. Golden graduated from the University of Michigan with a bachelor of science degree in engineering and from the University of Chicago Booth Graduate School of Business with an MBA. Before forming Evergreen in 2005, Golden steadily built her experience by working at JLL in Chicago, Trammell Crow and Moody Rambin in Houston. When she isn’t representing her clients, Golden devotes her time to several business and charitable organizations. She also plays tennis and golf, enjoys snowboarding and prefers to spend her days hiking with her husband and two daughters. All of those activities? Golden said that they are great ways to keep her out of the kitchen! 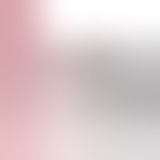