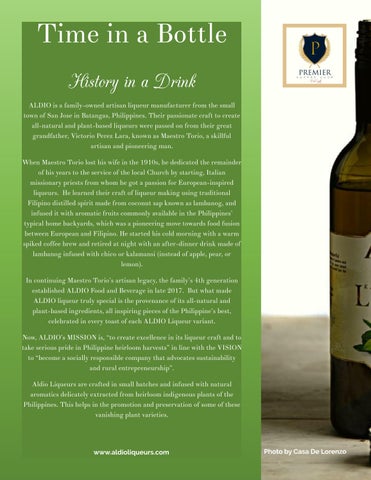 T ime in a Bottle History inaDrink AL DI O is a family- owned artisan liqueur manufacturer from the small town of San Jose in Batangas, Philippines. T heir passionate craft to create all- natural and plant- based liqueurs were passed on from their great grandfather, Victorio Perez L ara, known as Maestro Torio, a skillful artisan and pioneering man. W hen Maestro Torio lost his wife in the 1910s, he dedicated the remainder of his years to the service of the local Church by starting, I talian missionary priests from whom he got a passion for European- inspired liqueurs. He learned their craft of liqueur making using traditional Filipino distilled spirit made from coconut sap known as lambanog, and infused it with aromatic fruits commonly available in the Philippines? typical home backyards, which was a pioneering move towards food fusion between European and Filipino. He started his cold morning with a warm spiked coffee brew and retired at night with an after- dinner drink made of lambanog infused with chico or kalamansi (instead of apple, pear, or lemon). I n continuing Maestro Torio?s artisan legacy, the family?s 4th generation established AL DI O Food and Beverage in late 2017. But what made AL DI O liqueur truly special is the provenance of its all- natural and plant- based ingredients, all inspiring pieces of the Philippine?s best, celebrated in every toast of each AL DI O L iqueur variant. Now, AL DI O?s MI SSI ON is, ?to create excellence in its liqueur craft and to take serious pride in Philippine heirloom harvests? in line with the VI SI ON to ?become a socially responsible company that advocates sustainability and rural entrepreneurship?. Aldio L iqueurs are crafted in small batches and infused with natural aromatics delicately extracted from heirloom indigenous plants of the Philippines. T his helps in the promotion and preservation of some of these vanishing plant varieties.

"Let us teach our people again to be proud that they are Filipinos. Let us teach them to realize anew that being a Filipino means having as rich and noble a heritage of language, culture, patriotism, and heroic deeds as any nation on earth. Let us teach a steadfast faith in Divine Providence, a stable family institution, the unhampered enjoyment of civil liberties, the advantages of constitutional government, and the potential of rich and spacious land." - Carlos P. Romulo 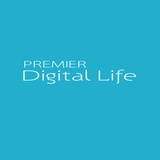