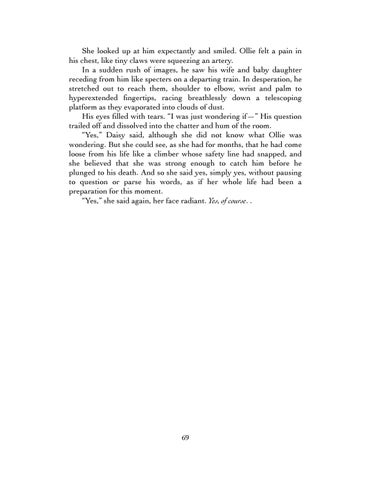 She looked up at him expectantly and smiled. Ollie felt a pain in his chest, like tiny claws were squeezing an artery. In a sudden rush of images, he saw his wife and baby daughter receding from him like specters on a departing train. In desperation, he stretched out to reach them, shoulder to elbow, wrist and palm to hyperextended fingertips, racing breathlessly down a telescoping platform as they evaporated into clouds of dust. His eyes filled with tears. “I was just wondering if—” His question trailed off and dissolved into the chatter and hum of the room. “Yes,” Daisy said, although she did not know what Ollie was wondering. But she could see, as she had for months, that he had come loose from his life like a climber whose safety line had snapped, and she believed that she was strong enough to catch him before he plunged to his death. And so she said yes, simply yes, without pausing to question or parse his words, as if her whole life had been a preparation for this moment. “Yes,” she said again, her face radiant. Yes, of course. .

The Red Earth Review is a literary journal published once a year by The Red Earth MFA @ Oklahoma City University. https://www.okcu.edu/artsci/departments/english/redearthmfa/red-earth-review/ 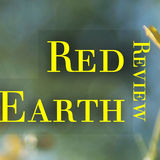