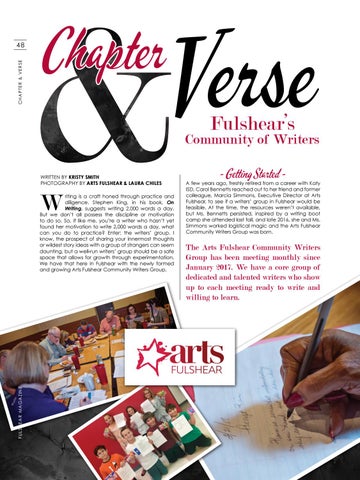 riting is a craft honed through practice and diligence. Stephen King, in his book, On Writing, suggests writing 2,000 words a day. But we don’t all possess the discipline or motivation to do so. So, if like me, you’re a writer who hasn’t yet found her motivation to write 2,000 words a day, what can you do to practice? Enter: the writers’ group. I know, the prospect of sharing your innermost thoughts or wildest story ideas with a group of strangers can seem daunting, but a well-run writers’ group should be a safe space that allows for growth through experimentation. We have that here in Fulshear with the newly formed and growing Arts Fulshear Community Writers Group.

A few years ago, freshly retired from a career with Katy ISD, Carol Bennetts reached out to her friend and former colleague, Marcia Simmons, Executive Director at Arts Fulshear, to see if a writers’ group in Fulshear would be feasible. At the time, the resources weren’t available, but Ms. Bennetts persisted, inspired by a writing boot camp she attended last fall, and late 2016, she and Ms. Simmons worked logistical magic and the Arts Fulshear Community Writers Group was born.

The Arts Fulshear Community Writers Group has been meeting monthly since January 2017. We have a core group of dedicated and talented writers who show up to each meeting ready to write and willing to learn.