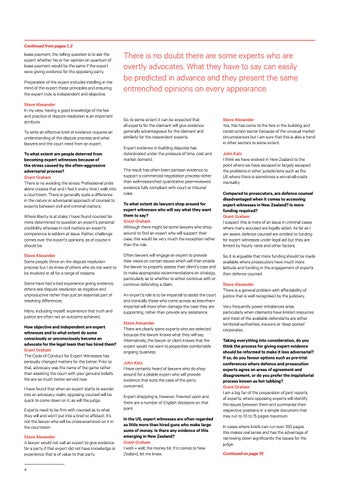 Continued from pages 1, 2 lease payment, the telling question is to ask the expert whether his or her opinion on quantum of lease payment would be the same if the expert were giving evidence for the opposing party. Preparation of the expert includes instilling in the mind of the expert these principles and ensuring the expert truly is independent and objective. Steve Alexander In my view, having a good knowledge of the law and practice of dispute resolution is an important attribute. To write an effective brief of evidence requires an understanding of the dispute process and what lawyers and the court need from an expert. To what extent are people deterred from becoming expert witnesses because of the stress caused by the often-aggressive adversarial process? Grant Graham There is no avoiding the stress. Professional pride alone creates that and I feel it every time I walk into a courtroom. There is generally quite a difference in the nature or adversarial approach of counsel to experts between civil and criminal matters. Where liberty is at stake, I have found counsel far more determined to question an expert’s personal credibility whereas in civil matters an expert’s competence is seldom at issue. Rather, challenge comes over the expert’s opinions, as of course it should be. Steve Alexander Some people thrive on the dispute resolution process but I do know of others who do not want to be involved at all for a range of reasons. Some have had a bad experience giving evidence, others see dispute resolution as negative and unproductive rather than just an essential part of resolving differences. Many, including myself, experience that truth and justice are often not an outcome achieved. How objective and independent are expert witnesses and to what extent do some consciously or unconsciously become an advocate for the legal team that has hired them? Grant Graham The Code of Conduct for Expert Witnesses has seriously changed matters for the better. Prior to that, advocacy was the name of the game rather than assisting the court with your genuine beliefs. We are so much better served now. I have found that when an expert starts to wander into an advocacy realm, opposing counsel will be quick to come down on it, as will the judge. Experts need to be firm with counsel as to what they will and won’t put into a brief or affidavit. It’s not the lawyer who will be cross-examined on it in the courtroom. Steve Alexander A lawyer would not call an expert to give evidence for a party if that expert did not have knowledge or experience that is of value to that party. 4

There is no doubt there are some experts who are overtly advocates. What they have to say can easily be predicted in advance and they present the same entrenched opinions on every appearance

So, to some extent it can be expected that all experts for the claimant will give evidence generally advantageous for the claimant and similarly for the respondent experts. Expert evidence in building disputes has deteriorated under the pressure of time, cost and market demand. The result has often been partisan evidence to support a commercial negotiation process rather than well-researched quantitative peer-reviewed evidence fully compliant with court or tribunal rules. To what extent do lawyers shop around for expert witnesses who will say what they want them to say? Grant Graham Although there might be some lawyers who shop around to find an expert who will support their case, this would be very much the exception rather than the rule. Often lawyers will engage an expert to provide their views on certain issues which will then enable the lawyer to properly assess their client’s case and to make appropriate recommendations on strategy, particularly as to whether to either continue with or continue defending a claim. An expert’s role is to be impartial to assist the court and ironically those who come across as less-thanimpartial will more often damage the case they are supporting, rather than provide any assistance. Steve Alexander There are clearly some experts who are selected because the lawyer knows what they will say. Alternatively, the lawyer or client knows that the expert would not want to jeopardise comfortable ongoing business. John Katz I have certainly heard of lawyers who do shop around for a pliable expert who will provide evidence that suits the case of the party concerned. Expert shopping is, however, frowned upon and there are a number of English decisions on that point. In the US, expert witnesses are often regarded as little more than hired guns who make large sums of money. Is there any evidence of this emerging in New Zealand? Grant Graham I wish – well, the money bit. If it comes to New Zealand, let me know.

Steve Alexander Yes, this has come to the fore in the building and construction sector because of the unusual market circumstances but I am sure that this is also a trend in other sectors to some extent. John Katz I think we have evolved in New Zealand to the point where we have escaped or largely escaped the problems in other jurisdictions such as the US where there is sometimes a win-at-all-costs mentality. Compared to prosecutors, are defence counsel disadvantaged when it comes to accessing expert witnesses in New Zealand? Is more funding required? Grant Graham I suspect this is more of an issue in criminal cases where many accused are legally aided. As far as I am aware, defence counsel are entitled to funding for expert witnesses under legal aid but they are limited by hourly rates and other factors.  So, it is arguable that more funding should be made available where prosecutors have much more latitude and funding in the engagement of experts than defence counsel. Steve Alexander There is a general problem with affordability of justice that is well recognised by the judiciary. Very frequently power imbalances arise, particularly when claimants have limited resources and most of the available defendants are either territorial authorities, insurers or ‘deep pocket’ corporates. Taking everything into consideration, do you think the process for giving expert evidence should be reformed to make it less adversarial? If so, do you favour options such as pre-trial conferences where defence and prosecution experts agree on areas of agreement and disagreement, or do you prefer the inquisitorial process known as hot tubbing? Grant Graham I am a big fan of the preparation of joint reports of experts, where opposing experts will identify the issues between them and summarise their respective positions in a simple document that may run to 10 to 15 pages maximum. In cases where briefs can run over 100 pages this makes real sense and has the advantage of narrowing down significantly the issues for the judge. Continued on page 10