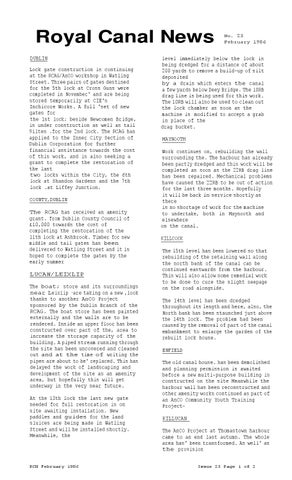 Royal Canal News DUBLIN Lock gate construction is continuing at the RCAG/AnCO workshop in Watling Street. Three pairs of gates destined for the 5th lock at Cross Guns were completed in November' and are being stored temporarily at CIE's Inchicore Works. A full 'set of new gates for the 1st lock; beside Newcomen Bridge, is under construction as well as tail 9iltes .for the 2nd lock. The RCAG has applied to the Inner City Section of Dublin Corporation for further financial assistance towards the cost of this work, and is also seeking a grant to complete the restoration of the last two locks within the City, the 6th lock at Shandon Gardens and the 7th lock .at Liffey Junction. COUNTY,DUBLIN The RCAG has received an amenity grant. from Dublin County Council of 拢10,000 towards the cost of completing the restoration of the 11th lock at Ashbrook. Timber for new middle and tail gates has been delivered to Watling Street and it is hoped to complete the gates by the early summer LUCAN/LEIXLIP The boat; store and its surroundings near Leixlip 路are taking on a new ,look thanks to another AnCO Project sponsored by the Dublin Branch of the RCAG. The boat store has been painted externally and the walls are to be rendered. Inside an upper floor has been constructed over part of the, area to increase the storage capacity of the building. A piped stream running through the site has been uncovered and cleaned out and at the time of writing the pipes are about to be' replaced. This has delayed the work of landscaping and development of the site as an amenity area, but hopefully this will get underway in the very near future. At the 13th lock the last new gate needed for full restoration is on site awaiting installation. New paddles and guides for the land sluices are being made in Watling Street and will he installed shortly. Meanwhile, the

level immediately below the lock is being dredged for a distance of about 200 yards to remove a build-up of silt deposited by a drain which enters the canal a few yards below Deey Bridge. The l0RB drag line is being used for this work. The 10RB will also be used to clean out the lock chamber as soon as the machine is modified to accept a grab in place of the drag bucket. MAYNOOTH Work continues on, rebuilding the wall surrounding the. The harbour has already been partly dredged and this work will be completed as soon as the 22RB drag line has been repaired. Mechanical problems have caused the 22RB to be out of action for the last three months. Hopefully it will be back in service shortly as there is no shortage of work for the machine to undertake, both in Maynooth and elsewhere on the canal. KILLCOCK The 15th level has been lowered so that rebuilding of the retaining wall along the north bank of the canal can be continued eastwards from the harbour. This will also allow some remedial work to be done to cure the slight seepage on the road alongside. The 14th level has been dredged throughout its length and here, also, the North bank has been staunched just above the 14th lock. The problem had been caused by the removal of part of the canal embankment to enlarge the garden of the rebuilt lock house. ENFIELD The old canal house. has been demolished and planning permission is awaited before a new multi-purpose building is constructed on the site Meanwhile the harbour wall has been reconstructed and other amenity works continued as part of an AnCO Community Youth Training Project~ KILLUCAN The AnCO Project at Thomastown harbour came to an end last autumn. The whole area has' been transformed. As well' as the provision Issue 23 Page 1 of 2

of a boat slip all the harbour walls have been' restored and a feature has been made of the feeder stream. The Killucan Branch, of the RCAG is to be congratulated on the success of this amenity project. COUNTY WESTMEATH The Environmental Employment Project in Mullingar has also ended and here, too the canal has been transformed. Wherever access was possible from the bank the waterway has been dredged. New paths have been laid down on both banks and many other improvements carried out at various locations in the town and on the outskirts. The County Council has now received the go-ahead for its very ambitious Social Employment Project for which recruiting began last month. The long term objective of this project is, the full restoration of: the canal through the County New lock gates are already being made. in the new AnCO workshop at Killucan. This is housed in the old railway goods shed which was modified and reconstructed for the purpose. BALLYNACARGY At the 36th lock the breast. gates have been staunched by lining' with polythene. New land racks and paddles have been made and fitted, enabling the stop planks above the lock to be removed and thus giving better control over the amount of water retained in; the 36th level However, the full benefit of this improvement was not obtained last 'year owing to the exceptionally wet weather. The level is liable to rise very quickly after heavy rain and overflow the bank and therefore was kept low as a precaution. No problems would arise in a normal season.

the fact that it was impossible to procure any kind of insurance cover. Moreover, it meant that fund raising suffered as a result. However, a sponsored walk in May realised over £400 and a similar amount was raised at the “Queen of the Royal Canal” dance in the Rustic Inn in Abbeyshrule in July. In October there was a small sale of work which realised over £200· At the time .of writing the Branch is awaiting clearance from Trades Unions before commencing,· more work on the harbour under the Social Employment Scheme BOOK REVIEW. A celebration of 250 years of Ireland's Inland Waterways by Ruth Delany, 192pp, Appletree Press 1986.Ir£l2.95 (£l0:95stg.)

Twenty years have elapsed since the first two volume,' history of Ireland's Canal and river navigations were published. Ruth Delany was co-author of one of· these volumes covering the waterways of the South. Since then she has delved ever deeper into the waterways archives and has produced this completely new book which is both comprehensive and eminently readable. The history of every navigation in the country is covered; their planning, construction, use and ultimate fate. Many of course have been lost forever; no longer existing as even a blue line on the map. Others fortunately have either survived more or less' intact or are being restored. As valuable amenities.

The book is most attractively produced and is fully illustrated with photographs, many of which have not previous1y appeared in print. Special The stop planks have now been mention must also be made of the placed above the 37th.lock and the maps, specially drawn by Mary level raised about three feet. The Hanna with first class detail next job will be to fully re-water and accuracy. This concise this level. to fully rewater't,hi:s readable volume willlevel. undoubtedly appeal to every At Ballynacargy all the spoil from canal enthusiast. the dredging of the harbour has Published by: been removed and the area The Royal Canal Amenity Group levelled. Twenty trees have been planted beside the harbour area. It. was a great disappointment to the local RCAG Branch that it was not possible to hold the “Annual Gala” in 1985 due to RCN February 1986