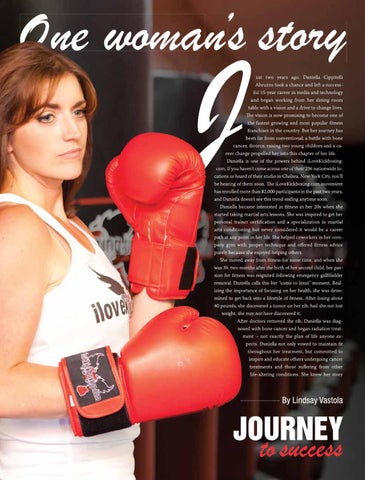 One woma woman’s woman ’s story ust two years ago, Daniella Cippitelli Abruzzo took a chance and left a successful 15-year career in media and technology and began working from her dining room table with a vision and a drive to change lives. The vision is now promising to become one of the fastest growing and most popular fitness franchises in the country. But her journey has been far from conventional; a battle with bone cancer, divorce, raising two young children and a career change propelled her into this chapter of her life. Daniella is one of the powers behind iLoveKickboxing. com. If you haven’t come across one of their 236 nationwide locations or heard of their studio in Chelsea, New York City, you’ll be hearing of them soon. The iLoveKickboxing.com movement has enrolled more than 82,000 participants in the past two years, and Daniella doesn’t see this trend ending anytime soon. Daniella became interested in fitness in her 20s when she started taking martial arts lessons. She was inspired to get her personal trainer certification and a specialization in martial arts conditioning but never considered it would be a career path at any point in her life. She helped coworkers in her company gym with proper technique and offered fitness advice purely because she enjoyed helping others. She moved away from fitness for some time, and when she was 39, two months after the birth of her second child, her passion for fitness was reignited following emergency gallbladder removal. Daniella calls this her “come to Jesus” moment. Realizing the importance of focusing on her health, she was determined to get back into a lifestyle of fitness. After losing about 40 pounds, she discovered a tumor on her rib; had she not lost weight, she may not have discovered it. After doctors removed the rib, Daniella was diagnosed with bone cancer and began radiation treatment – not exactly the plan of life anyone expects. Daniella not only vowed to maintain fit throughout her treatment, but committed to inspire and educate others undergoing cancer treatments and those suffering from other life-altering conditions. She knew her story