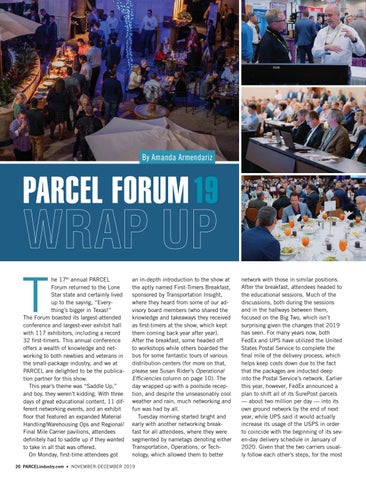 he 17th annual PARCEL Forum returned to the Lone Star state and certainly lived up to the saying, “Everything’s bigger in Texas!” The Forum boasted its largest-attended conference and largest-ever exhibit hall with 117 exhibitors, including a record 32 first-timers. This annual conference offers a wealth of knowledge and networking to both newbies and veterans in the small-package industry, and we at PARCEL are delighted to be the publication partner for this show. This year’s theme was “Saddle Up,” and boy, they weren’t kidding. With three days of great educational content, 11 different networking events, and an exhibit floor that featured an expanded Material Handling/Warehousing Ops and Regional/ Final Mile Carrier pavilions, attendees definitely had to saddle up if they wanted to take in all that was offered. On Monday, first-time attendees got

an in-depth introduction to the show at the aptly named First-Timers Breakfast, sponsored by Transportation Insight, where they heard from some of our advisory board members (who shared the knowledge and takeaways they received as first-timers at the show, which kept them coming back year after year). After the breakfast, some headed off to workshops while others boarded the bus for some fantastic tours of various distribution centers (for more on that, please see Susan Rider’s Operational Efficiencies column on page 10). The day wrapped up with a poolside reception, and despite the unseasonably cool weather and rain, much networking and fun was had by all. Tuesday morning started bright and early with another networking breakfast for all attendees, where they were segmented by nametags denoting either Transportation, Operations, or Technology, which allowed them to better

network with those in similar positions. After the breakfast, attendees headed to the educational sessions. Much of the discussions, both during the sessions and in the hallways between them, focused on the Big Two, which isn’t surprising given the changes that 2019 has seen. For many years now, both FedEx and UPS have utilized the United States Postal Service to complete the final mile of the delivery process, which helps keep costs down due to the fact that the packages are inducted deep into the Postal Service’s network. Earlier this year, however, FedEx announced a plan to shift all of its SurePost parcels — about two million per day — into its own ground network by the end of next year, while UPS said it would actually increase its usage of the USPS in order to coincide with the beginning of its seven-day delivery schedule in January of 2020. Given that the two carriers usually follow each other’s steps, for the most