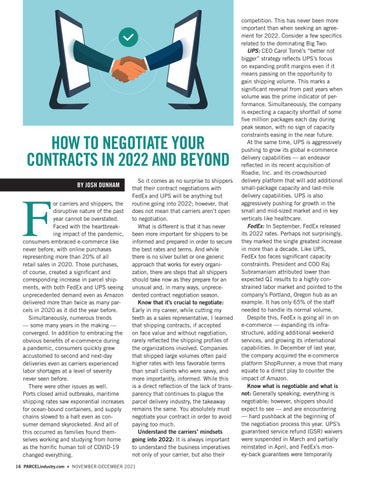 HOW TO NEGOTIATE YOUR CONTRACTS IN 2022 AND BEYOND

or carriers and shippers, the disruptive nature of the past year cannot be overstated. Faced with the heartbreaking impact of the pandemic, consumers embraced e-commerce like never before, with online purchases representing more than 20% of all retail sales in 2020. Those purchases, of course, created a significant and corresponding increase in parcel shipments, with both FedEx and UPS seeing unprecedented demand even as Amazon delivered more than twice as many parcels in 2020 as it did the year before. Simultaneously, numerous trends — some many years in the making — converged. In addition to embracing the obvious benefits of e-commerce during a pandemic, consumers quickly grew accustomed to second and next-day deliveries even as carriers experienced labor shortages at a level of severity never seen before. There were other issues as well. Ports closed amid outbreaks, maritime shipping rates saw exponential increases for ocean-bound containers, and supply chains slowed to a halt even as consumer demand skyrocketed. And all of this occurred as families found themselves working and studying from home as the horrific human toll of COVID-19 changed everything.

So it comes as no surprise to shippers that their contract negotiations with FedEx and UPS will be anything but routine going into 2022; however, that does not mean that carriers aren’t open to negotiation. What is different is that it has never been more important for shippers to be informed and prepared in order to secure the best rates and terms. And while there is no silver bullet or one generic approach that works for every organization, there are steps that all shippers should take now as they prepare for an unusual and, in many ways, unprecedented contract negotiation season. Know that it’s crucial to negotiate: Early in my career, while cutting my teeth as a sales representative, I learned that shipping contracts, if accepted on face value and without negotiation, rarely reflected the shipping profiles of the organizations involved. Companies that shipped large volumes often paid higher rates with less favorable terms than small clients who were savvy, and more importantly, informed. While this is a direct reflection of the lack of transparency that continues to plague the parcel delivery industry, the takeaway remains the same. You absolutely must negotiate your contract in order to avoid paying too much. Understand the carriers’ mindsets going into 2022: It is always important to understand the business imperatives not only of your carrier, but also their

competition. This has never been more important than when seeking an agreement for 2022. Consider a few specifics related to the dominating Big Two: UPS: CEO Carol Tomé’s “better not bigger” strategy reflects UPS’s focus on expanding profit margins even if it means passing on the opportunity to gain shipping volume. This marks a significant reversal from past years when volume was the prime indicator of performance. Simultaneously, the company is expecting a capacity shortfall of some five million packages each day during peak season, with no sign of capacity constraints easing in the near future. At the same time, UPS is aggressively pushing to grow its global e-commerce delivery capabilities — an endeavor reflected in its recent acquisition of Roadie, Inc. and its crowdsourced delivery platform that will add additional small-package capacity and last-mile delivery capabilities. UPS is also aggressively pushing for growth in the small and mid-sized market and in key verticals like healthcare. FedEx: In September, FedEx released its 2022 rates. Perhaps not surprisingly, they marked the single greatest increase in more than a decade. Like UPS, FedEx too faces significant capacity constraints. President and COO Raj Subramaniam attributed lower than expected Q1 results to a highly constrained labor market and pointed to the company’s Portland, Oregon hub as an example. It has only 65% of the staff needed to handle its normal volume. Despite this, FedEx is going all in on e-commerce — expanding its infrastructure, adding additional weekend services, and growing its international capabilities. In December of last year, the company acquired the e-commerce platform ShopRunner, a move that many equate to a direct play to counter the impact of Amazon. Know what is negotiable and what is not: Generally speaking, everything is negotiable; however, shippers should expect to see — and are encountering — hard pushback at the beginning of the negotiation process this year. UPS’s guaranteed service refund (GSR) waivers were suspended in March and partially reinstated in April, and FedEx’s money-back guarantees were temporarily