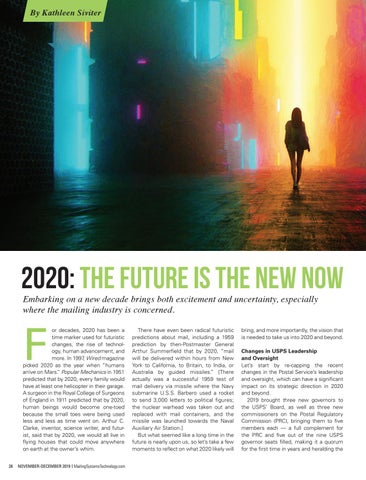 2020: THE FUTURE IS THE NEW NOW Embarking on a new decade brings both excitement and uncertainty, especially where the mailing industry is concerned.

or decades, 2020 has been a time marker used for futuristic changes, the rise of technology, human advancement, and more. In 1997, Wired magazine picked 2020 as the year when “humans arrive on Mars.” Popular Mechanics in 1951 predicted that by 2020, every family would have at least one helicopter in their garage. A surgeon in the Royal College of Surgeons of England in 1911 predicted that by 2020, human beings would become one-toed because the small toes were being used less and less as time went on. Arthur C. Clarke, inventor, science writer, and futurist, said that by 2020, we would all live in flying houses that could move anywhere on earth at the owner’s whim.

There have even been radical futuristic predictions about mail, including a 1959 prediction by then-Postmaster General Arthur Summerfield that by 2020, “mail will be delivered within hours from New York to California, to Britain, to India, or Australia by guided missiles.” [There actually was a successful 1959 test of mail delivery via missile where the Navy submarine U.S.S. Barbero used a rocket to send 3,000 letters to political figures; the nuclear warhead was taken out and replaced with mail containers, and the missile was launched towards the Naval Auxiliary Air Station.] But what seemed like a long time in the future is nearly upon us, so let’s take a few moments to reflect on what 2020 likely will

bring, and more importantly, the vision that is needed to take us into 2020 and beyond. Changes in USPS Leadership and Oversight Let’s start by re-capping the recent changes in the Postal Service’s leadership and oversight, which can have a significant impact on its strategic direction in 2020 and beyond. 2019 brought three new governors to the USPS’ Board, as well as three new commissioners on the Postal Regulatory Commission (PRC), bringing them to five members each — a full complement for the PRC and five out of the nine USPS governor seats filled, making it a quorum for the first time in years and heralding the