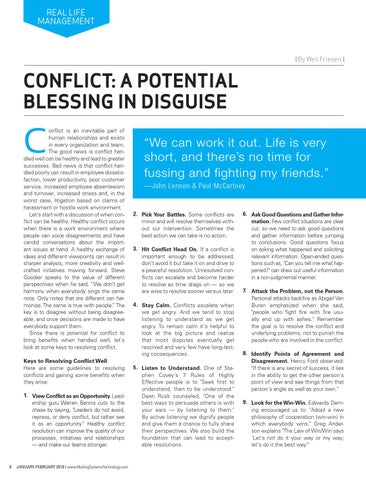 CONFLICT: A POTENTIAL BLESSING IN DISGUISE

onflict is an inevitable part of human relationships and exists in every organization and team. The good news is conflict handled well can be healthy and lead to greater successes. Bad news is that conflict handled poorly can result in employee dissatisfaction, lower productivity, poor customer service, increased employee absenteeism and turnover, increased stress and, in the worst case, litigation based on claims of harassment or hostile work environment. Let&#39;s start with a discussion of when conflict can be healthy. Healthy conflict occurs when there is a work environment where people can voice disagreements and have candid conversations about the important issues at hand. A healthy exchange of ideas and different viewpoints can result in sharper analysis, more creativity and wellcrafted initiatives moving forward. Steve Goodier speaks to the value of different perspectives when he said, “We don’t get harmony when everybody sings the same note. Only notes that are different can harmonize. The same is true with people.” The key is to disagree without being disagreeable, and once decisions are made to have everybody support them. Since there is potential for conflict to bring benefits when handled well, let&#39;s look at some keys to resolving conflict.

Keys to Resolving Conflict Well Here are some guidelines to resolving conflicts and gaining some benefits when they arise: 1. View Conflict as an Opportunity. Leadership guru Warren Bennis cuts to the chase by saying, &quot;Leaders do not avoid, repress, or deny conflict, but rather see it as an opportunity.&quot; Healthy conflict resolution can improve the quality of our processes, initiatives and relationships — and make our teams stronger.

“We can work it out. Life is very short, and there’s no time for fussing and fighting my friends.” —John Lennon &amp; Paul McCartney

2. Pick Your Battles. Some conflicts are minor and will resolve themselves without our intervention. Sometimes the best action we can take is no action. 3. Hit Conflict Head On. If a conflict is important enough to be addressed, don&#39;t avoid it but take it on and drive to a peaceful resolution. Unresolved conflicts can escalate and become harder to resolve as time drags on — so we are wise to resolve sooner versus later. 4. Stay Calm. Conflicts escalate when we get angry. And we tend to stop listening to understand as we get angry. To remain calm it&#39;s helpful to look at the big picture and realize that most disputes eventually get resolved and very few have long-lasting consequences. 5. Listen to Understand. One of Stephen Covey&#39;s 7 Rules of Highly Effective people is to &quot;Seek first to understand, then to be understood.&quot; Dean Rusk counseled, &quot;One of the best ways to persuade others is with your ears — by listening to them.&quot; By active listening we dignify people and give them a chance to fully share their perspectives. We also build the foundation that can lead to acceptable resolutions.

6. Ask Good Questions and Gather Information. Few conflict situations are clear cut, so we need to ask good questions and gather information before jumping to conclusions. Good questions focus on asking what happened and soliciting relevant information. Open-ended questions such as, &quot;Can you tell me what happened?&quot; can draw out useful information in a non-judgmental manner. 7. Attack the Problem, not the Person. Personal attacks backfire as Abigail Van Buren emphasized when she said, &quot;people who fight fire with fire usually end up with ashes.&quot; Remember the goal is to resolve the conflict and underlying problems, not to punish the people who are involved in the conflict. 8. Identify Points of Agreement and Disagreement. Henry Ford observed: &quot;If there is any secret of success, it lies in the ability to get the other person&#39;s point of view and see things from that person&#39;s angle as well as your own.&quot; 9. Look for the Win-Win. Edwards Deming encouraged us to: &quot;Adopt a new philosophy of cooperation (win-win) in which everybody wins.&quot; Greg Anderson explains &quot;The Law of Win/Win says ‘Let&#39;s not do it your way or my way; let&#39;s do it the best way.’&quot;